Robertson, Ian An Atlas of the Peninsular War (Historical Atlas)

An Atlas of the Peninsular War (Historical Atlas) 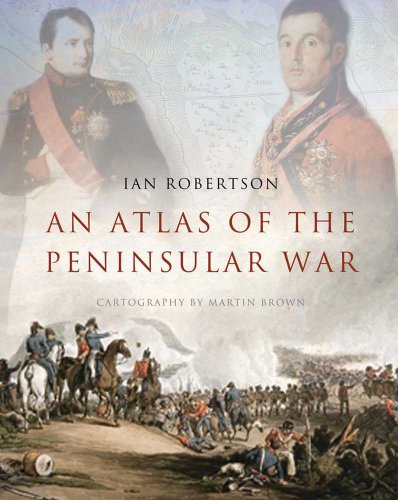 "This book is ideal for aficionados of the era's military history."-Library Journal * Library Journal * "Cartography `is a way of achieving ideological supremacy over space'. Ian Robertson's Atlas of the Peninsular War bears out the point. Fifty-three maps, accompanied by corresponding explanatory texts, are preceded by a chronology of the main historical events and an introduction. In all these texts the author justifies his views brilliantly. . . . Undoubtedly a pleasure to read. . . . It fulfills the clear aims of the author, and it can be a valuable companion to those who enjoy visiting Wellington's Peninsular battlefields."-Alicia Laspra, Times Literary Supplement -- Alicia Laspra * Times Literary Supplement *

This is the first comprehensive modern atlas of the Peninsular War, the series of campaigns in Spain and Portugal between Napoleonic France and British forces commanded by the Duke of Wellington. Here a distinguished military historian examines and explains the sequence of battles and the course of the war through expertly drawn cartography in color. A general introduction, together with a historical summary setting the campaigns in context, is followed by 53 detailed maps and plans, each with a complementary text providing a succinct description of the action depicted. The great battles of Vimeiro, Talavera, Busaco, Albuera, Salamanca, Vitoria, and the Pyrenees are all graphically described, together with the main sieges and many minor combats. This is an indispensable companion to both serious students and military enthusiasts interested in the Napoleonic wars.

1. An Atlas of the Peninsular War