Verwandte Artikel zu Egyptian Art in the Age of the Pyramids

Egyptian Art in the Age of the Pyramids

Egyptian Art in the Age of the Pyramids 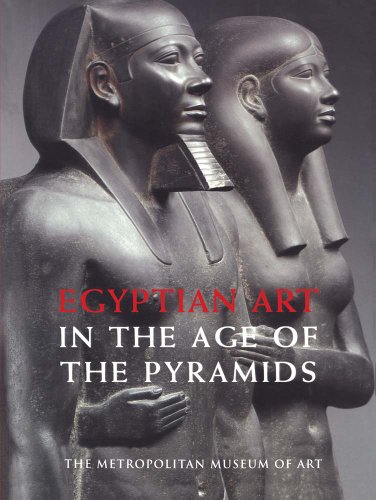 Ancient Egypt continues to exert a real fascination for the public, as attested by the unfailing success of the major exhibitions devoted to the subject. One of the notable qualities of the exhibition and publicationEgyptian Art in the Age of the Pyramids, the first to be devoted entirely to the approximately five centuries of the Old Kingdom, is that they restores our temporal perspective. In doing so, the exhibition and publication demonstrate the extraordinary flowering of the arts at the time the pyramids were built, when not only architecture, but also sculpture, painting, and the decorative arts were at their peak. The show and book allow us to reunite works of the same provenance that have been dispersed throughout the world by the vicissitudes of acquisition. In addition to offering enormous aesthetic pleasure, the reassembling of these works has great art-historical value: for a brief period of time, it gives us the opportunity to evaluate, on the basis of the objects themselves, the attribution of certain dates and the pertinence of certain hypothesis. In this way, the exhibition and publication acquaints the public with the exciting scholarly reevaluation of this formative phase of Egyptian art that has taken place internationally during the 1990s.

Over the course of the roughly five-hundred-year duration of the Old Kingdom, Egyptians not only created the pyramids, the world's most abstract building form; on the basis of initiatives originating in the Archaic Period, they also once and for all defined the essence of their art. Centering their attention on the human image but depicting animals, plants, landscapes, and inanimate objects as well, Old Kingdom artists used stone as their primary medium. This was a material whose durability best served the culture's all-encompassing goal of defeating death, by preserving life in the form of statues and reliefs created for tombs. Distilling the multiplicity of existence, artists created a limited number of standard types and a canon of circumscribed formal concepts that was flexible enough to allow the depiction of life's diversity through subtle variation and an infusion of innumerable realistic details. Keen observation of nature through understanding of the functioning of both human and animal bodies led to the invention of images of an organic truthfulness unparalleled at the time.

The catalogue includes fifteen essays by experts in the Egyptian art field, spanning subjects such as history, royal architecture and sculpture, and nonroyal statuary. The volume also includes maps, an extensive chronology, a glossary, and a complete bibliography. [This book was originally published in 1999 and has gone out of print. This edition is a print-on-demand version of the original book.]

James P. Allen is the Wilbour Professor of Egyptology at Brown University. He is a former curator of Egyptian art at the Metropolitan Museum of Art in New York and president of the International Association of Egyptologists. His previous publications include Genesis in Egypt: The Philosophy of Ancient Egyptian Creation Accounts (1989), The Heqanakht Papyri (2002), The Ancient Egyptian Pyramid Texts (2005), The Debate between a Man and his Soul (2010), The Ancient Egyptian Language: An Historical Study (2013), and three editions of Middle Egyptian: An Introduction to the Language and Culture of Hieroglyphs, 3rd edition (2014).

1. Egyptian Art in the Age of the Pyramids

Buchbeschreibung Metropolitan Museum of Art, 2013. Zustand: Good. A+ Customer service! Satisfaction Guaranteed! Book is in Used-Good condition. Pages and cover are clean and intact. Used items may not include supplementary materials such as CDs or access codes. May show signs of minor shelf wear and contain limited notes and highlighting. Bestandsnummer des Verkäufers 0300199724-2-4

2. Egyptian Art in the Age of the Pyramids