Verwandte Artikel zu Society Must Be Defended: Lectures at the Coll GE de... 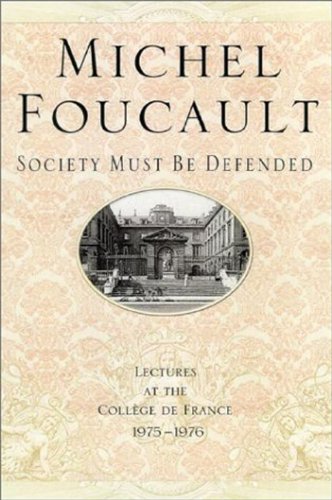 An examination of relations between war and politicsFrom 1971 until his death in 1984, Michel Foucault taught at the College de France, perhaps the most prestigious intellectual institution in Europe. Each year, in a series of 12 public lectures, Foucault sought to explain his research of the previous year. These lectures do not reduplicate his published books, although they do have themes in common. The lectures show Foucault ranging freely and conversationally over the implications of his research.In "Society Must Be Defended," Foucault deals with the emergence in the early 17th century of a new understanding of society and its relation to war. War was now seen as the permanent basis of all institutions of power, a hidden presence within society that could be deciphered by an historical analysis. Tracing this development, Foucault outlines a genealogy of power/knowledge that was to become a primary concern in his final years.

Michel Foucault, acknowledged as the preeminent philosopher of France in the ’70s and ’80s, had enormous impact throughout the world, in many disciplines. His books include: History of Sexuality, volumes I, II, and III, Madness and Civilization, and Discipline and Punish.

Translator David Macey has translated 20 books from the French and is the author of The Lives of Michel Foucault and Frantz Fanon (Picador). He lives in Leeds, England.

3. SOCIETY MUST BE DEFENDED: LECT

4. SOCIETY MUST BE DEFENDED: LECT

5. SOCIETY MUST BE DEFENDED: LECT