Verwandte Artikel zu The Wicked King: 2 (Folk of the Air)

Black, Holly The Wicked King: 2 (Folk of the Air) 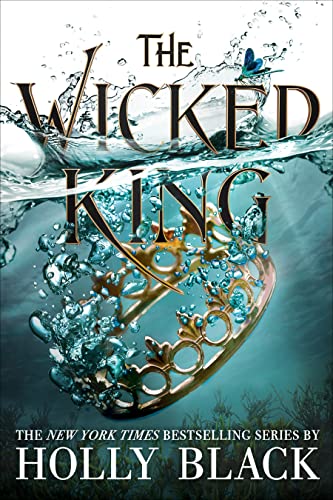 Críticas:
Praise for The Cruel Prince
"Lush, dangerous, a dark jewel of a book. Black's world is intoxicating, imbued with a relentless sense of peril that kept me riveted through every chapter of Jude's journey. And Jude! She is a heroine to love--brave but pragmatic, utterly human. This delicious story will seduce you and leave you desperate for just one more page."--Leigh Bardugo, #1 New York Times bestselling author of Six of Crows and Crooked Kingdom

* "Another fantastic, deeply engaging, and all-consuming work from Black that belongs on all YA shelves."--School Library Journal, starred review

* "Jude, who struggles with a world she both loves and hates and would rather be powerful and safe than good, is a compelling narrator. Whatever a reader is looking for--heart-in-throat action, deadly romance, double-crossing, moral complexity--this is one heck of a ride."--Booklist, starred review

"This is a heady blend of Faerie lore, high fantasy, and high school drama, dripping with description that brings the dangerous but tempting world of Faerie to life. Black is building a complex mythology; now is a great time to tune in."--Kirkus Reviews

Praise for The Wicked King:
"A stunning and compelling sequel."----SLJ, Starred Review

The Wicked King has satisfying twists and turns, sizzling passions, brutal violence, spies and revels of all sorts--no one brings the intricate courtly politics of Faerie to life quite as well, or with as much intelligence, as Holly Black. --Shelf Awareness, starred review

*"A rare second volume that surpasses the first, with, happily, more intrigue and passion still to come."--Booklist, Starred Review

*"[A] dangerous journey filled with mystery, betrayal, intrigue, and romance....Larger-than-life action in a kingdom packed with self-centered, evil, and manipulating characters also doles out real life issues."--VOYA, Starred Review
Reseńa del editor:
The enchanting and bloodthirsty sequel to the New York Times bestselling novel The Cruel Prince.
You must be strong enough to strike and strike and strike again without tiring.
The first lesson is to make yourself strong.
After the jaw-dropping revelation that Oak is the heir to Faerie, Jude must keep her younger brother safe. To do so, she has bound the wicked king, Cardan, to her, and made herself the power behind the throne. Navigating the constantly shifting political alliances of Faerie would be difficult enough if Cardan were easy to control. But he does everything in his power to humiliate and undermine her even as his fascination with her remains undiminished.
When it becomes all too clear that someone close to Jude means to betray her, threatening her own life and the lives of everyone she loves, Jude must uncover the traitor and fight her own complicated feelings for Cardan to maintain control as a mortal in a Faerie world.

The Wicked King (The Folk of the Air) Hardcover

The Wicked King (The Folk of the Air)