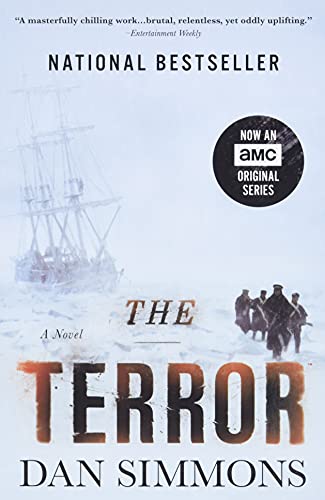 "The best and most unusual historical novel I have read in years."--The Boston Globe

"The Terror is nothing less than a revelation. Dan Simmons is a giant among novelists, and I am in awe of his achievement."--Lincoln Child

"Dan Simmons writes with the salty grace and precision of Patrick O'Brian. But in piling supernatural nightmare upon historical nightmare, layering mystery upon mystery, he has produced a turbocharged vision of popular doom."--Men's Journal

The bestselling novel, "a brilliant, massive combination of history and supernatural horror" (Stephen King) is now a major TV series.
The men on board the HMS Terror have every expectation of finding the Northwest Passage. But what they don't expect is a monstrous predator lurking behind the Arctic ice. When the expedition's leader, Sir John Franklin, meets a horrifying end, Captain Francis Crozier takes command, leading his surviving crewmen on a last desperate attempt to flee south across the ice.
But another winter is rapidly approaching, and with it, scurvy and starvation. Crozier and his men may find that there is no escaping the terror stalking them southward. And with the crushing cold and the fear of almost certain death at their backs, the most horrifying monster among them may be each other.

Buchbeschreibung Paperback. Zustand: New. Media Tie In. Language: English. Brand new Book. The "masterfully chilling" novel that inspired the hit AMC series (Entertainment Weekly). The men on board the HMS Terror -- part of the 1845 Franklin Expedition, the first steam-powered vessels ever to search for the legendary Northwest Passage -- are entering a second summer in the Arctic Circle without a thaw, stranded in a nightmarish landscape of encroaching ice and darkness. Endlessly cold, they struggle to survive with poisonous rations, a dwindling coal supply, and ships buckling in the grip of crushing ice. But their real enemy is even more terrifying. There is something out there in the frigid darkness: an unseen predator stalking their ship, a monstrous terror clawing to get in. "The best and most unusual historical novel I have read in years." --Katherine A. Powers, Boston Globe. Bestandsnummer des Verkäufers AAC9780316486095

The Terror (Paperback or Softback)