Verwandte Artikel zu Inside / Outside: From the Basics to the Practice of...

Grear, Malcolm Inside / Outside: From the Basics to the Practice of Design

Inside / Outside: From the Basics to the Practice of Design 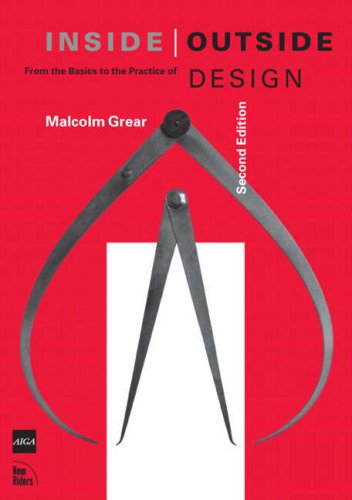 Renowned artist and design legend Malcolm Grear has permanently shaped the design world with his work, lecturing, writing and teaching. Grear approaches design by looking at the inner parts of an object, process, or idea in order to understand the whole. He believes that form and structure are the underpinnings of effective design, which stands contrary to the reductive approach taught in most modern design education. Deftly and sparingly capturing the essence of his subject matter, Grear offers unique insight into the design process with images and forms drawn from nature, typography, art and design. These examples from both his teaching (inside) and professional practice (outside) begin with design problems and illuminate the processes by which the best solutions are found. Grear skillfully bridges the gap between design theory and real-world practice. Malcolm Grear has played a vital role as designer and educator in the field of visual communication for 48 years. Malcolm Grear Designers was founded in 1960 and has had more than 28 solo exhibitions in museums and galleries. He taught in Rhode Island School of Design from 1960 to 1998 where he received the Honorary Alumnus Award for "...professional achievements as an internationally acclaimed graphic designer (that) brought overwhelming recognition to Rhode Island School of Design's Department of Graphic Design and its graduates." Malcolm Grear has been awarded five honorary doctorate degrees and was selected by the National Association of Schools of Art and Design, comprising 190 institutions, to receive the Citation for Distinguished Service in the Visual Arts. Grear continues to design, lecture, and conduct design workshops throughout the country and will occasionally teach a graduate design course. Visit www.mgrear.com for more information. Inside / Outside is an AIGA Design Press book, published under Peachpit's New Riders imprint in partnership with AIGA.

For forty-five years, Malcolm Grear has played a vital role in the field of visual communication design as both designer and educator. He taught in the Rhode Island School of Design's Graphic Design Department for 28 years and received numerous teaching and professional achievement awards, including the prestigious John R. Frazier Award for Excellence in Teaching. For his work in graphic design, Mr. Grear has received numerous awards from national and international organizations, including the American Institute of Graphic Arts, the International Center of Typographic Arts, and the Art Society of North America. In 1960, Grear established the highly respected design firm, Malcolm Grear Designers (MGD), known for its clean lines and clarity of vision. MGD has done memorable identity and print design work for a wide-range of clients, from the Metropolitan Opera to US Department of Health & Human Services to Scientific American and Hallmark Cards. Most notably, MGD was selected from 500 firms to design the "Look of the Games" for the 1996 Centennial Olympics in Atlanta, GA.

1. Inside / Outside: From the Basics to the Practice of Design (2nd Edition)