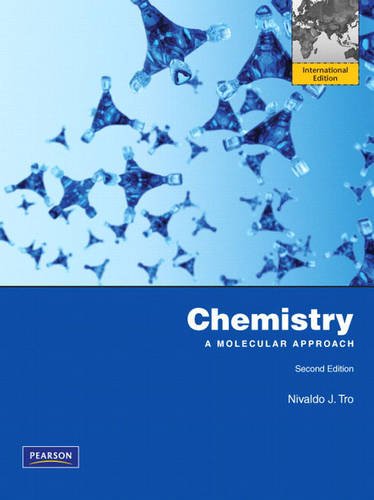 This innovative text explains difficult concepts in a relevant, student-oriented manner. Chemistry is presented visually through multi-level images-macroscopic, molecular and symbolic representations-helping you see the connections among the formulas (symbolic), the world around you (macroscopic), and the atoms and molecules that make up the world (molecular). Among other revisions, the Second Edition offers a crisp new design, adds more challenging problems, and significantly revises coverage of electrochemistry. This is just the standalone book if you want the book/access kit order:0321706153 / 9780321706157 Chemistry: A Molecular Approach with MasteringChemistry (R) Package consists of: 0321651782 / 9780321651785 Chemistry: A Molecular Approach 0321695348 / 9780321695345 MasteringChemistry (R) with Pearson eText Student Access Kit for Chemistry: A Molecular Approach

Nivaldo Tro is Professor of Chemistry at Westmont College in Santa Barbara, California, where he has been a faculty member since 1990. He received his Ph.D. in chemistry from Stanford University, for work on developing and using optical techniques to study the adsorption and desorption of molecules to and from surfaces in ultrahigh vacuum. He then went on to the University of California at Berkeley, where he did post-doctoral research on ultra-fast reaction dynamics in solution. Since coming to Westmont, Professor Tro has been awarded grants from the American Chemical Society Petroleum Research Fund, from Research Corporation, and from the National Science Foundation to study the dynamics of various processes occurring in thin adlayer films adsorbed on dielectric surfaces. He has twice been honored as Westmont's outstanding teacher of the year and has also received the college's outstanding researcher of the year award. Professor Tro lives in Santa Barbara with his wife, Ann, and their four children, Michael, Ali, Kyle, and Kaden. In his leisure time, Professor Tro enjoys reading good literature to his children and being outdoors with his family.