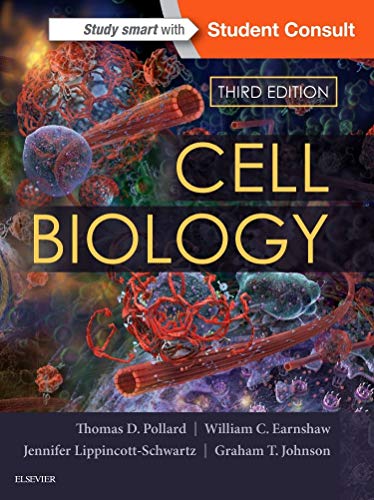 The much-anticipated 3rd edition of Cell Biology delivers comprehensive, clearly written, and richly illustrated content to today’s students, all in a user-friendly format. Relevant to both research and clinical practice, this rich resource covers key principles of cellular function and uses them to explain how molecular defects lead to cellular dysfunction and cause human disease. Concise text and visually amazing graphics simplify complex information and help readers make the most of their study time.

Thomas Dean Pollard is a prominent educator, cell biologist and biophysicist whose research focuses on understanding cell motility through the study of actin filaments and myosin motors. He is Sterling Professor of Molecular, Cellular & Developmental Biology and a Professor of Cell Biology and Molecular Biophysics & Biochemistry at Yale University. He was Dean of Yale's Graduate School of Arts and Sciences from 2010 to 2014, and President of the Salk Institute for Biological Studies from 1996 to 2001. Pollard is very active in promoting scientific education and research primarily through two major societies, both of which he is a past President: the American Society for Cell Biology and the Biophysical Society

William Charles Earnshaw is Professor of Chromosome Dynamics at the University of Edinburgh where he has been a Wellcome Trust Principal Research Fellow since 1996. Earnshaw is an elected Fellow of the Royal Society since 2013 for his studies of mitotic chromosome structure and segregation. Before Edinburgh, he was Professor of Cell Biology and Anatomy at Johns Hopkins School of Medicine.

Jennifer Lippincott-Swartz is Group Leader at the Howard Hughes Medical Institute Janelia Research Campus. Her lab uses live cell imaging approaches to analyze the spatio-temporal behaviour and dynamic interactions of molecules in cells with a special focus on neurobiology. Before Janelia, Lippincott-Swartz was a primary investigator and chief of the Section on Organelle Biology in the Cell Biology and Metabolism Branch. Her work there included a collaboration with physicists Eric Betzig and Harald Hess (now group leaders at Janelia), who proposed a new function for the photoactivatable protein. The scientists used the protein to generate photoactivatable fluorophores, or dyes, which enabled them to illuminate different sets of molecules sequentially, creating a microscope image far more detailed than previously possible. The method, called super-resolution microscopy, garnered Betzig the 2014 Nobel Prize in Chemistry.

Graham Johnson is a computational biologist and Certified Medical Illustrator (CMI) with approx. 20 years of professional experience. He is Director of the Animated Cell at the Allen Institute. Before the Allen Institute, Johnson’s lab in the California Institute for Quantitative Biosciences at the University of California, San Francisco worked to generate, simulate and visualize molecular models of cells. His lab’s Mesoscope project and his team at Allen Institute continue this mission by uniting biologists, programmers and artists to interoperate the computational tools of science and art.