Verwandte Artikel zu All in One Basket

Deborah Mitford Duchess Of Devonshire; Devonshire, Deborah Vivien Freeman All in One Basket

All in One Basket 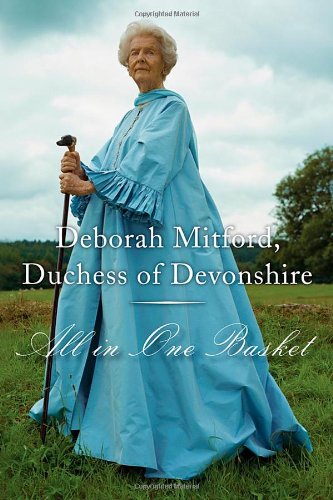 In her beguiling memoir, Wait for Me!, Deborah Mitford, Duchess of Devonshire (and the youngest of the famously witty brood of writers, agitators, and icons), recounted her eventful life with wit and grace. All in One Basket collects the Duchess of Devonshire’s breezy, occasional writings and provides a disarming look at a life lived with great zest and originality.

All in One Basket combines two earlier collections, Counting My Chickens and Home to Roost, its sequel, which was never published in the United States. In these pages, we hear anecdotes about famous friends from Evelyn Waugh to John F. Kennedy; tales of struggle and success at Chatsworth, England's greatest stately home; and of course the tales of her beloved chickens, which the Duchess began raising as a child for pocket money. In All in One Basket, glamorous recollections happily coexist with practical insights into country life, and the result is a revelatory, intimate portrait of a woman described by The New York Times as a “national treasure.”

Deborah Vivien Freeman-Mitford Cavendish, Duchess of Devonshire, was brought up in Oxfordshire, England. In 1950 her husband, Andrew, the 11th Duke of Devonshire, inherited extensive estates in Yorkshire and Ireland as well as Chatsworth, the family seat in Derbyshire, and Deborah became chatelaine of one of England’s great houses. She is the author of Wait for Me!, Counting My Chickens and Home to Roost, among other books, and her letters have been collected in The Mitfords: Letters Between Six Sisters and In Tearing Haste: The Correspondence of the Duchess of Devonshire and Patrick Leigh Fermor. Following her husband’s death in 2004, she moved to a village on the Chatsworth estate.

1. ALL IN ONE BASKET

2. All in One Basket

3. All in One Basket

4. All in One Basket