Verwandte Artikel zu One of Us: The Story of Anders Breivik and the Massacre...

Seierstad, Asne One of Us: The Story of Anders Breivik and the Massacre in Norway

One of Us: The Story of Anders Breivik and the Massacre in Norway 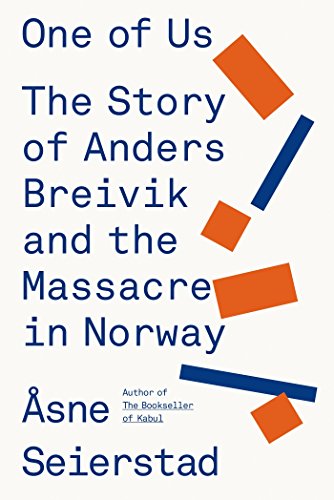 Named among the Best Books of the Year by The New York Times Book Review, NPR, The Boston Globe, The Guardian, Buzzfeed, Publishers Weekly, and Men's Journal

"One of Us has the feel of a nonfiction novel. Like Norman Mailer's The Executioner's Song and Truman Capote's In Cold Blood, it has an omniscient narrator who tells the story of brutal murders and, by implication, sheds light on the society partly responsible for them. Although those two books are beautifully written, I found One of Us to be more powerful and compelling . . . As Seierstad weaves the stories of Utoya's campers with her central narrative about Breivik-revealing the mundane details of their family lives, their youthful ambitions, idealism and naiveté-the book attains an almost unbearable weight. This tragedy isn't literary and symbolic; it's the real thing . . . Seierstad has written a remarkable book, full of sorrow and compassion. After spending years away from home as a foreign correspondent in Afghanistan, Chechnya and Iraq, bearing witness to the crimes of other nations, she has confronted Norway's greatest trauma since the Nazi occupation, without flinching and without simplifying . . . One of Us must have been difficult to write, and yet from the opening pages it has an irresistible force." --Eric Schlosser, The New York Times Book Review

"The roughly 70 pages Ms. Seierstad devotes to [the attacks] are harrowing in their forensic exactitude . . . These scenes are balanced by moments of tremendous heroism, and I'd be lying if I said I didn't read the final half of One of Us with perpetually moist cheeks . . . The nonfiction horror story told in One of Us moves slowly, inexorably and with tremendous authority . . . The epilogue, about her methods, should be required reading in journalism schools . . . It's said that exact detail is uniquely helpful when it comes to mending after terrible events. If it is true, as Stephen Jay Gould contended, that 'nothing matches the holiness and fascination of accurate and intricate detail, ' then Ms. Seierstad has delivered a holy volume indeed." --Dwight Garner, The New York Times

"Engrossing, important . . . There are many, many indelible images in Seierstad's account . . . As hard as it is to read about the attack, as frustrating as it is to learn how many delaying mistakes the first responders made and as monstrous as Breivik is, [his victims] on that island that day were beautiful in their idealism. They deserve to be witnessed, which is the ultimate reason to read One of Us." --Maureen Corrigan, NPR's "Fresh Air"

"One of Us is a masterpiece of journalism, a deeply painful chronicle of an inexplicable and horrifying attack that we'll likely never understand . . .[A] brilliant, unforgettable book." --Michael Schaub, NPR

"One Of Us reads like a true crime novel, but it has the journalistic chops to back it up . . . Not only a stunning achievement in journalism, it's a touchstone on how to write about tragedy with detail, honesty, and compassion." --Samantha Edwards, A.V. Club

"A vivid, thoroughly researched, and suspenseful account of the 2011 massacre that killed 77 people in her native Norway . . . The book features evocative portraits of some of the victims and brims with vivid descriptions of the villages, city squares, buildings, and fjords of Norway, touching on the country's politics, changing demographics, and cultural shifts. With a reporter's passion for details and a novelist's sense of story, Seierstad's book is at once an unforgettable account of a national tragedy and a lively portrait of contemporary Norway." --Publishers Weekly (starred review)

"Asne Seierstad's One of Us is almost unbearable to read and absolutely impossible to turn away from: its account of an unthinkable tragedy is reported with staggering rigor and recounted with grace. It's hard to leave this book without feeling incredible grief, without feeling shaken to the core, without feeling urged toward essential questions about what we call evil and how it comes to pass." --Leslie Jamison, author of The Empathy Exams

"A chilling descent into the mind of mass murderer Anders Breivik . . . [Seierstad's] explorations of Breivik . . . have the unsettling quality that readers will associate with novelist Stieg Larsson . . . [One of Us] packs all the frightening power of a good horror novel." --Kirkus Reviews

"An exhaustive account . . . This book throws a great deal of light on the life and times of a miserable killer." --Ian Buruma, The Guardian

"This is journalism at its very best . . . Undoubtedly Seierstad's most powerful narrative to date." --Matthew Campbell, The Sunday Times

"An astonishing piece of work . . . One of Us looks straight at horror and doesn't flinch: it is classic reporting . . . We need to take note." --David Sexton, London Evening Standard

"Scrupulously researched . . . [Seierstad] has a remarkable eye for the haunting detail, particularly of empathy, and of grief." --Craig Brown, Daily Mail

"Powerful . . . It's hard to see how, as a definitive account of what happened that awful July day, it could ever be bettered." --Eilis O'Hanlon, Irish Independent

"[A] masterful and forensically detailed account of what may be the first cultural-ideological spree killing in history." --Stav Sherez, The Telegraph

"Seierstad's enormously well written depictions of the perpetrator, the victims, and the Norway where this could happen makes the abstract real and shows us that the most horrible things can take place among all that we perceive as safe and normal. The wounds from Utøya will not heal on its own. They need Åsne Seierstad's brave, sensitive, and competent treatment. Seierstad succeeds in writing the dead back to life, even though the story inexorably pushes them to a tragic ending." --Sam Sundgren, Svenska Dagbladet

"It is a broad, well written, and important story, in form and writing much like a novel. Seierstad follows some of the people whose destinies abruptly cross one another on the island of Utøya, partly the perpetrator and partly some of his victims. She meets them all with compassion, at eye level--a close-up technique that makes the moment when the bullets start to fly almost unbearable. I have seldom read a depiction of violence under such great agony." --Lars Linder, Dagens Nyheter

Widely acclaimed as a masterpiece, Åsne Seierstad’s One of Us is essential reading for a time when mass killings are so grimly frequent.

On July 22, 2011, Anders Behring Breivik detonated a bomb outside the Norwegian prime minister's office in central Oslo, killing eight people. He then proceeded to a youth camp on the wooded island of Utøya, where he killed sixty-nine more, most of them teenage members of the country's governing Labour Party. In One of Us, the journalist Åsne Seierstad tells the story of this terrible day and its reverberations. How did Breivik, a gifted child from an affluent neighborhood in Oslo, become Europe's most reviled terrorist? How did he accomplish an astonishing one-man murder spree? And how did a famously peaceful and prosperous country cope with the slaughter of so many of its young?

As in her international bestseller The Bookseller of Kabul, Seierstad excels at the vivid portraiture of lives under stress. She delves deep into Breivik's childhood, showing how a hip-hop and graffiti aficionado became a right-wing activist, a successful entrepreneur, and then an Internet game addict and self-styled master warrior who believed he could save Europe from the threat of Islam and multiculturalism. She writes with equal intimacy about Breivik's victims, tracing their political awakenings, teenage flirtations and hopes, and ill-fated journeys to the island. By the time Seierstad reaches Utøya and relates what happened there, we know both the killer and those he will kill. In the book's final act, Seierstad describes Breivik's tumultuous public trial. As Breivik took the stand and articulated his ideas, an entire country debated whether he should be deemed insane, and asked why a devastating sequence of police errors allowed one man to do so much harm.

One of Us is at once a psychological study of violent extremism, a dramatic true crime procedural, and a compassionate inquiry into how a privileged society copes with homegrown evil. Lauded in Scandinavia for its literary merit and moral poise, One of Us is the true story of one of our age's most tragic events.

1. One of Us: The Story of Anders Breivik and the Massacre in Norway

2. One of Us: The Story of Anders Breivik and the Massacre in Norway

3. One of Us: The Story of Anders Breivik and the Massacre in Norway

4. One of Us: The Story of Anders Breivik and the Massacre in Norway

5. One of Us: The Story of Anders Breivik and the Massacre in Norway

6. One of Us: The Story of Anders Breivik and the Massacre in Norway

8. One of Us: The Story of Anders Breivik and the Massacre in Norway