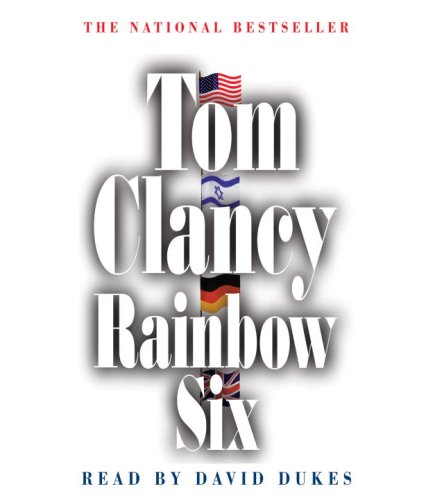 4 Compact Discs / 6 Hours
Read by David Dukes
(Also available on cassette)
Tom Clancy's most shocking story to date - and closer to reality than any government would care to admit.

Over the course of nine novels, Tom Clancy's "genius for big, compelling plots" and his "natural narrative gift" (The New York Times Magazine) have established him as one of the preeminent storytellers of our time.  In his new and most extraordinary novel, Rainbow Six, Clancy goes beyond anything he has done before.

At its heart is John Clark, the ex-Navy SEAL of Without Remorse, a master of secret operational missions, and newly named the head of an international task force dedicated to combating terrorism.  Clark is looking forward to sinking his teeth into a new mission, but the opportunities start coming faster than anyone could have expected; an incident at a Swiss bank, the kidnapping of an international trader in Germany, a  terrible raid on an amusement park in Spain.

Each episode seems separate, yet the timing disturbs Clark.  Is there a connection?  He tries to figure out where all this activity is heading, but there is no way to predict the real threat: a group of terrorists like none the world has ever encountered, a group so extreme that their success could literally mean the end of life on this earth as we know it.

This is Clancy at his best - and there is none better.

Tom Clancy's previous novels include The Hunt for Red October, Red Storm Rising, Patriot Games, Debt of Honor, Clear and Present Danger, Without Remorse, and Executive Orders.  He is co-creator of the Op-Center, Power Plays, and Net Force series.  He lives in Maryland.

About the Reader
David Dukes has appeared on Broadway in Someone to Watch Over Me, M. Butterfly, and Amadeus.  His film work includes The Men's Club and Without a Trace.