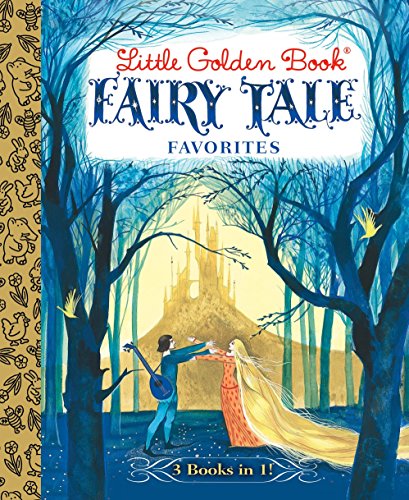 A deluxe treasury of classic Little Golden Book fairy tales includes the stories "The Twelve Dancing Princesses," "The Wild Swans" and three stories from The Blue Book of Fairy Tales.

Jacob Grimm (1785–1863) and Wilhelm Grimm (1786–1859) were born in Hanau, Germany. They both studied at Marburg, and from 1808 to 1829 mainly worked in Kassel as state-appointed librarians. Both brothers had been professors at Göttingen for several years when, in 1837, they became two of the seven leading Göttingen academics dismissed from their posts by the new king of Hanover for their liberal political views. In 1840, they were invited by King Frederick William IV of Prussia to settle in Berlin as members of the Academy of Sciences, and here they remained until their deaths.Jacob, one of Germany’s greatest scholars, is justly regarded as the founder of the scientific study of the German language and medieval German literature. His most monumental achievements were the Deutsche Grammatik (1819–1837) and, with his brother's assistance, the initiation of the great Deutsches Wörterbuch, the many volumes of which were not completed by later scholars until 1961, and which has become the equivalent of the Oxford English Dictionary. Between them, and often in collaboration, the Grimms were reponsible for pioneering work on medieval texts, the heroic epic, legends, and mythology; as well as for many other contributions to the study of ancient German culture. One of their most remarkable publications was the Kinder- und Hausmärchen (1812, with many subsequent editions), which remains to this day the most famous collection of folktales in the world.

Hans Christian Andersen (1805–75) was born in Odense, Denmark. The son of a poor shoemaker, who nonetheless was a great reader, made a toy theater for his son and taught him to notice every natural wonder as they walked in the woods together on Sundays. His father died when he was 11, and it wasn’t until six years later that, with the help of a patron, he finally went to a state secondary school attended by much younger children. There he suffered at the hands of a cruel headmaster, but he acquired an education and was determined to be a writer. He published his first novel and his first fairy tales in 1835; thereafter he wrote over 150 more of these stories which have become classics in many languages.Although he originally addressed his fairy tales to children (and some would maintain he had a streak of childhood in his nature) he insisted they were “for all ages,” and the gentleness and humor that are their characteristics are recognized by everyone.