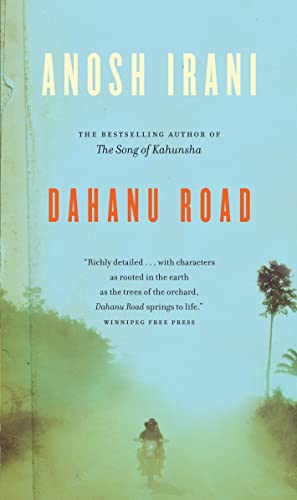 "Anosh Irani does for Iranis what Rohinton Mistry did for Parsis. The Irani community comes alive for those who do not know it."
--SUNDAY TIMES OF INDIA

"The soul-searching journey of three generations of Iranis is blended into a heart-warming story...The author portrays [an] unlikely yet compelling romance between a young Irani man and an even younger Warli woman with an exquisite touch. The beauty and purity of their love lingers even when it is violently truncated...The stories of generations as well as of individuals unfold on a sweeping scale, intertwining and coming full circle."
--THE DECCAN HERALD, INDIA

"... exquisitely plotted, researched and written ... a story of intertwined destinies and uncomfortable class divisions crafted in an unapologetic voice."
--MINT LOUNGE, INDIA  "Anosh Irani's latest offering is a saga of unrelenting tragedy and a tale well told."
--THE CALCUTTA TELEGRAPH "[Dahanu Road] goes beyond sepia-tinted nostalgia to depict the savage wrestling for power between landlords and Warli workers...the plot [is] taut and suspenseful...a chronicle of the eccentric members of one of the world's most exclusive and quickly declining clubs - the Zoroastrian community...Alternately tragic and funny, Dahanu Road doesn't lose sight of it all."
--TIME OUT, NEW DELHI "... NOT-TO-BE-MISSED..."
-- ELLE INDIA "...Dahanu Road is engagingly written and Irani creates a lovable cast of characters."
--MUMBAI BOSS "Author Anosh Irani provides us with a unique blend of fact and fiction, interspersing village life with realities of Irani history. A heart-wrenching chronicle of love and loss, Dahanu Road is one man's search for truth in a sea of deception."
--THE TIMES OF INDIA "After a long time, an unputdownable book. A fascinating insight into Dahanu's Irani and Warli communities, written with warmth, honesty, and a great deal of humour by a skilled storyteller."
--SOONI TARAPOREVALA, Oscar nominated screenwriter of Salaam Bombay, Mississippi Masala, and The Namesake "Anosh Irani moves back and forth through the generations skillfully. His writing is visual and intense, and he creates his flawed characters with humour and compassion as they struggle with changing times and cultural mores, while trying to survive the ghosts of the past. Irani gives us a fascinating and exotic story that takes place within a little known historical context of Iran/Indian history."
--THE CHRONICLE HERALD "Anosh Irani has a talent for peeling back layers of history and class in brilliant tales that are wittily folkloric, devastatingly political, and flamboyantly mythological. He must come from a long line of storytellers, fire keepers and, I suspect, also magicians."
--RAWI HAGE, author of De Niro's Game and Cockroach

"A beautiful novel, Dahanu Road is big with love and infused with the passion of Anosh Irani's gentle yet shrewd prose."
--DONNA MORRISSEY, author of What They Wanted and Kit's Law

"Anosh Irani's third novel, Dahanu Road, offers a blend of personal family memories, historic truths and rich storytelling...it's proof positive that there's another superior talent from Southeast Asia living here. In writing about distant worlds he shows us the exotic Other, while at the same time enacting on foreign stages the moral challenges we all face."
--NATIONAL POST "Like Shakespeare's Romeo and Juliet, Dahanu Road, by Anosh Irani, is a story of forbidden love. Irani writes evocatively in a tale that has humour and texture as well as pathos."
--ELLE CANADA "Irani weaves an intricate web of personal and political relationships... With characters as rooted in the earth as the trees of the orchard, Dahanu Road springs to life. The fruits of Irani's labours will surely win him the acclaim he's enjoyed for his past work."
--WINNIPEG FREE PRESS "Irani keeps the intricate story moving . . . as grandfather and grandson struggle with the behaviours expected of their class. . . . A fascinating look at what can and can't be controlled despite the best of intentions."
-- GLOBE AND MAIL "Simply told and nicely paced. Readers who have never set foot in India will get a feel for the country."
--VANCOUVER SUN "Dahanu Road is the sort of novel book clubs will be drawn to like moths to a porch light for its exotic setting and the love story at its heart. . . . It's an intriguing place Irani shows us, a place where old struggles yield beauty and love, as well as death and pain."
--NEW BRUNSWICK TELEGRAPH-JOURNAL "Irani's writing seems to capture the heat of an Indian summer. As he delivers a tragic love story, he also writes about peoples unfamiliar to most Canadians, telling of class differences and connection to the land. Anosh Irani is one of the best young writers in Canada."
--UPTOWN MAGAZINE "Dahanu Road has much in common with Rohinton Mistry's Giller-Prize winning A Fine Balance...Irani unravels convoluted history and class division to lay bare a grand narrative....The pages are saturated with rich detail. The smells, vistas, religious rituals, and rhythms of nature on the road are key to the narrative's power."
--HERENB.COM Reseńa del editor:

Zairos is a dissolute young landowner's son living in the town of Dahanu, just outside Bombay, when hislife of careless luxury is brought up short by a mysterious death: the sudden suicide of Ganpat, a tribalworker on his family's estate. Soon he has fallen in love with Ganpat's daughter, Kusum, and finds himselfdefying taboos with their relationship. At the same time, his grandfather, Shapur, reveals to him the storyof their family and of the land that Zairos stands to inherit.


Dahanu Road brilliantly reveals the history of the relationship between the landowning Irani clan and theWarlis, local tribal people like Ganpat and Kusum who work the land for the Iranis. As Zairos' connectionwith Kusum deepens, he is drawn further into the mystery of Shapur's relationship with Ganpat and the other Warlis. Violence and hatred echo through history, and Zairos learns the terrible truth his grandfather has spent a lifetime hiding. With its inimitable mix of earthy humour and searing tragedy, this is undoubtedly Anosh Irani's most
ambitious novel.

Buchbeschreibung Zustand: Good. A+ Customer service! Satisfaction Guaranteed! Book is in Used-Good condition. Pages and cover are clean and intact. Used items may not include supplementary materials such as CDs or access codes. May show signs of minor shelf wear and contain limited notes and highlighting. Bestandsnummer des Verkäufers 0385667000-2-4

Buchbeschreibung Zustand: Good. Ships from the UK. Shows some signs of wear, and may have some markings on the inside. Bestandsnummer des Verkäufers 17576796-20