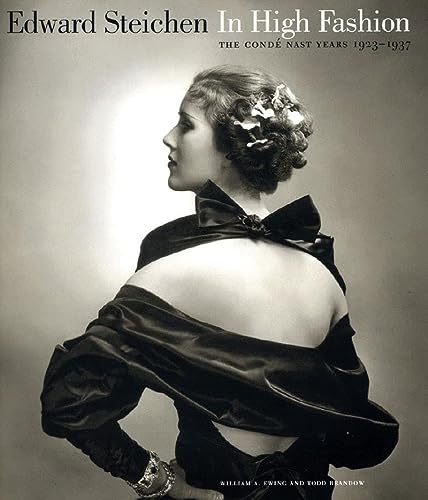 Edward Steichen was already a famous painter and photographer in America and abroad when, in early 1923, he was offered the most prestigious position in photography's commercial domain: that of chief photographer for Vogue and Vanity Fair.Over the next fifteen years, Steichen would produce a body of work of unequaled brilliance, dramatizing and glamorizing contemporary culture and its achievers in politics, literature, film, sport, dance, theater, opera, and the world of high fashion. Here are iconic images of Gloria Swanson, Gary Cooper, Greta Garbo, and Charlie Chaplin as well as numerous other celebrities drawn from an archive of more than two thousand original prints. Until now, no more than a handful have been exhibited or published in book form. The photographs of the 1920s and 1930s represent the high point in Steichen's career and are among the most striking creations of twentieth-century photography.

Todd Brandow is the founding director of the Foundation for the Exhibition of Photography. He lives in Minneapolis, Minnesota, and in Paris. William A. Ewing was Director of the Musee de l'Elysee in Lausanne from 1996 to 2010. His many publications on photography include The Body (1994), Face: The New Photographic Portrait (2006) and Arnold Newman: Masterclass (2012).

Buchbeschreibung FEP Editions in Association with W.W. Norton, USA, 2008. Hard Cover. Zustand: New. Zustand des Schutzumschlags: New. First/First Printing. Published on the occasion of an exhibition of the same name. 278 pps. inc. index. This is a large and heavy book and additional postage may be requested. Size: 4to - over 9ľ" - 12" tall. Bestandsnummer des Verkäufers 020361