Powers, Richard The Overstory: A Novel 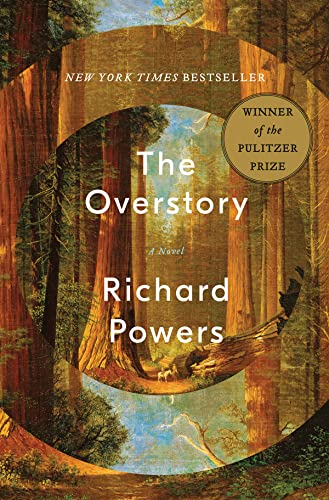 "The Overstory is a visionary, accessible legend for the planet that owns us, its exaltation and its peril, a remarkable achievement by a great writer." -- Thomas McGuane "This book is beyond special. Richard Powers manages to turn trees into vivid and engaging characters, something that indigenous people have done for eons but that modern literature has rarely if ever even attempted. It's not just a completely absorbing, even overwhelming book; it's a kind of breakthrough in the ways we think about and understand the world around us, at a moment when that is desperately needed." -- Bill McKibben "Powers is the rare American novelist writing in the grand realist tradition, daring to cast himself, in the critic Peter Brooks's term, as a 'historian of contemporary society.' He has the courage and intellectual stamina to explore our most complex social questions with originality, nuance, and an innate skepticism about dogma. At a time when literary convention favors novelists who write narrowly about personal experience, Powers's ambit is refreshingly unfashionable, restoring to the form an authority it has shirked." -- Nathaniel Rich - The Atlantic "An extraordinary novel....An astonishing performance....There is something exhilarating, too, in reading a novel whose context is wider than human life. The Overstory leaves you with a slightly adjusted frame of reference....What was happening to his characters passed into my conscience, like alcohol into the bloodstream, and left a feeling behind of grief or guilt, even after I put it down." -- Benjamin Markovits - The Guardian "A rousing, full-throated hymn to Nature's grandeur." -- Dan Cryer - San Francisco Chronicle "A big, ambitious epic....Powers juggles the personal dramas of his far-flung cast with vigor and clarity. The human elements of the book-the arcs his characters follow over the decades from crusading passion to muddled regret and a sense of failure-are thoroughly compelling. So are the extra-human elements, thanks to the extraordinary imaginative flights of Powers's prose, which persuades you on the very first page that you're hearing the voices of trees as they chide our species." -- Michael Upchurch - Boston Globe "Remarkable....This ambitious novel soars up through the canopy of American literature and remakes the landscape of environmental fiction." -- Ron Charles - Washington Post "Monumental...The Overstory accomplishes what few living writers from either camp, art or science, could attempt. Using the tools of the story, he pulls readers heart-first into a perspective so much longer-lived and more subtly developed than the human purview that we gain glimpses of a vast, primordial sensibility, while watching our own kind get whittled down to size....A gigantic fable of genuine truths." -- Barbara Kingsolver, The New York Times Book Review (cover review) "Autumn makes me think of leaves, which makes me think of trees, which makes me think of The Overstory, the best novel ever written about trees, and really, just one of the best novels, period." -- Ann Patchett "The Overstory, a novel about trees and people who understand them, is the eco-epic of the year and perhaps the decade. Unlike the Lorax, who spoke for the trees, Richard Powers prefers to let them do their own talking." -- Leanne Shapton, judge for the Man Booker Prize

An Air Force loadmaster in the Vietnam War is shot out of the sky, then saved by falling into a banyan. An artist inherits a hundred years of photographic portraits, all of the same doomed American chestnut. A hard-partying undergraduate in the late 1980s electrocutes herself, dies, and is sent back into life by creatures of air and light. A hearing- and speech-impaired scientist discovers that trees are communicating with one another. These four, and five other strangers-each summoned in different ways by trees-are brought together in a last and violent stand to save the continent's few remaining acres of virgin forest. In his twelfth novel, National Book Award winner Richard Powers delivers a sweeping, impassioned novel of activism and resistance that is also a stunning evocation of-and paean to-the natural world. From the roots to the crown and back to the seeds, The Overstory unfolds in concentric rings of interlocking fables that range from antebellum New York to the late twentieth-century Timber Wars of the Pacific Northwest and beyond, exploring the essential conflict on this planet: the one taking place between humans and nonhumans. There is a world alongside ours-vast, slow, interconnected, resourceful, magnificently inventive, and almost invisible to us. This is the story of a handful of people who learn how to see that world and who are drawn up into its unfolding catastrophe. The Overstory is a book for all readers who despair of humanity's self-imposed separation from the rest of creation and who hope for the transformative, regenerating possibility of a homecoming. If the trees of this earth could speak, what would they tell us? "Listen. There's something you need to hear."

The Overstory (Hardback or Cased Book)