It's the Middle Class, Stupid! 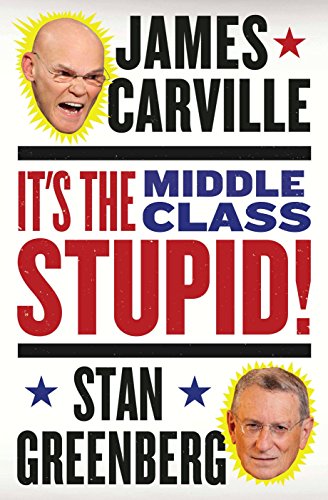 A political consultant best known as the lead strategist during Bill Clinton's successful presidential campaign explores how worldviews on the state of the economy differ between the public and elected officials, sharing provocative assessments of where the government has erred and actions that voters can take. 125,000 first printing.

James Carville is an American political consultant, commentator, educator, actor, attorney, media personality, and prominent liberal pundit. He gained national attention for his work as the lead strategist of the successful 1992 presidential campaign of Bill Clinton. Carville was a cohost of CNN's Crossfire until its final broadcast in June 2005. Since then, he has appeared on CNN's news program The Situation Room, and since 2009, he has hosted a weekly XM Radio program, 60/20 Sports, with Luke Russert, son of the late Tim Russert, who hosted NBC's Meet the Press. Carville, who is married to Republican political consultant Mary Matalin, has taught political science at Tulane University since 2009.

Stan Greenberg is a leading Democratic pollster and political strategist who has advised the campaigns of Bill Clinton, Al Gore, and John Kerry, and hundreds of other candidates and organizations in the United States and around the world. A political scientist who received his B.A. from Miami University and his Ph.D. from Harvard, Greenberg spent a decade teaching at Yale before becoming a political consultant. His 1985 study of Reagan Democrats in Macomb County, Michigan, became a classic of progressive political strategy, and is the basis for his continuing argument that Democrats must actively work to present themselves as populists advocating the expansion of opportunity for the middle class. Greenberg is married to Congresswoman Rosa DeLauro, who represents Connecticut's Third Congressional District.