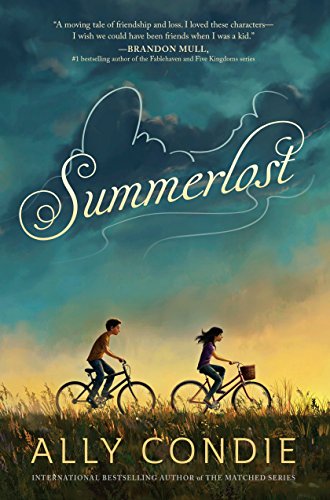 ★ "Condie is at her best . . . grabbing readers' interest from the first page." --Publishers Weekly, starred review

"A nuanced portrait of grief deeply grounded in the middle-school mind-set." --Booklist "Honest, lovely, and sad." --Kirkus Reviews ★ "Thoughtful, poetic chapter endings guide readers new to psychological depth toward meaningful connections between plot events and thematic reflections." --BCCB, starred review "Tender, insightful . . . generous and bittersweet, Summerlost has the emotional acuity of Ms. Condie's writing for older teenagers, but it's pitched just right for readers ages 10-14." --The Wall Street Journal Praise for Ally Condie's Atlantia "Utterly captivating. A heroine unlike any I'd met before, a setting I'd never glimpsed, a story I'd never imagined. Atlantia is fresh, wild, and engrossing. I love Ally Condie." --Shannon Hale, award-winning, bestselling author of Austenland and Dangerous "A gorgeous, crumbling underwater world, a murder mystery, a sweet romance, a sinister plot, long-protected secrets... they're all here! But what made us love this new stand-alone from talented Ally Condie? Rio. She's a strong, brave, self-sacrificing heroine who never gives up." --Justine Magazine "Condie brings tremendous depth to her world-building, finding terrific details in a culture created both to help people survive, and to perhaps keep them under control." --Salt Lake City Weekly "A fast-paced fantasy adventure tale in a richly drawn dystopian future . . . this is a title that's sure to be immensely popular with teens." --School Library Journal "Each mystery leads into another, and Condie keeps readers guessing to the end." --Shelf Awareness Praise for the International bestselling Matched trilogy: "This futuristic fable of love and free will asks: Can there be freedom without choice? The tale of Cassia's journey from acceptance to rebellion will draw you in and leave you wanting more." --Cassandra Clare, New York Times-bestselling author of The Infernal Devices and The Mortal Instruments series "A superb dystopian romance." --The Wall Street Journal "The hottest YA title to hit bookstores since The Hunger Games." --Entertainment Weekly "A fierce, unforgettable page-turner." --Kirkus Reviews, starred review "Condie's enthralling and twisty dystopian plot is well served by her intriguing characters and fine writing. . . . Cassia's metamorphosis is gripping and satisfying." --Publishers Weekly, starred review "Condie's prose is immediate and unadorned, with sudden pings of lush lyricism [and] reveals seeming to arrive on almost every page." --Kirkus Reviews, starred review "Distinct . . . authentic . . . poetic." --School Library Journal "Love triangle + struggle against the powers that be = perfect escape." --MTV.com Reseńa del editor:

A tender and compelling contemporary novel for young readers about facing loss and finding friendship, from Ally Condie, international bestselling author of the Matched series.

“Kids are awesome. And they are diverse. There are children with different abilities and backgrounds and experiences, and every one of them deserves to find themselves in children's literature and to know that they matter.” –Ally Condie, on Summerlost

Sometimes it takes a new friend to bring you home. It's the first real summer since the accident that killed Cedar's father and younger brother, Ben. Cedar and what’s left of her family are returning to the town of Iron Creek for the summer. They’re just settling into their new house when a boy named Leo, dressed in costume, rides by on his bike. Intrigued, Cedar follows him to the renowned Summerlost theatre festival. Soon, she not only has a new friend in Leo and a job working concessions at the festival, she finds herself surrounded by mystery. The mystery of the tragic, too-short life of the Hollywood actress who haunts the halls of Summerlost. And the mystery of the strange gifts that keep appearing for Cedar.

Infused with emotion and rich with understanding, Summerlost is the touching new novel from Ally Condie, the international bestselling author of the Matched series that highlights the strength of family and personal resilience in the face of tragedy.

★ "Condie is at her best . . . grabbing readers’ interest from the first page." —Publishers Weekly, starred review

"A nuanced portrait of grief deeply grounded in the middle-school mind-set." —Booklist