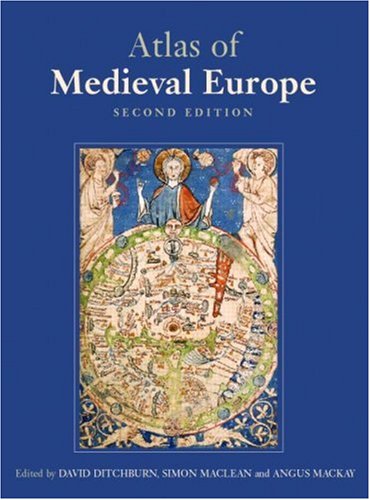 'A valuable resource for any teacher of medieval history at sixth-form or undergraduate level ... there is a good balance between maps which provide reference for necessary bread-and-butter topics, from the Roman Empire in 395 to European expansion at the end of the middle ages, and those which illustrate new work and thinking on less expected topics.' - History

'As the editors of the Atlas of Medieval Europe rightly point out, a good atlas for teaching the history of medieval Europe has been sadly lacking for some time. Their attempt to solve this problem is not only commendable, but also a largely successful enterprise. Better still, the atlas has been designed as a teaching aid with scholarly sophistication and an attention to detail that many such aids do not possess. All medievalsits, not just historians, will find this atlas a helpful new resource.' - The Medieval Review

'For any serious study of medieval European history and culture, an atlas is essential ... the aim, carried out very successfully, is to ensure clear and uncluttered maps with the right balance between detail and legibility.' - Journal of Australian and New Zealand Association for Medieval and Early Modern Studies

The Atlas of Medieval Europe covers the period from the fall of the Roman Empire through to the beginnings of the Renaissance, spreading from the Atlantic coast to the Russian steppes. Each map approaches a separate issue or series of events in medieval history, and a commentary locates it in its broader context.

This second edition has over forty new maps covering a variety of topics including:

Thorough coverage is also given to geographically peripheral areas like Portugal, Poland, Scandinavia and Ireland.

Providing a vivid representation of the development of nations, peoples and social structures, and charting political and military events, the Atlas takes a detailed look at a variety of key areas including language and literature; the development of trade, art and architecture; and the great cities and lives of historical figures.

With over 180 maps, expert commentaries and an extensive bibliography, this second edition of an essential reference guide to medieval Europe brings the complex and colourful history of the Middle Ages to life.