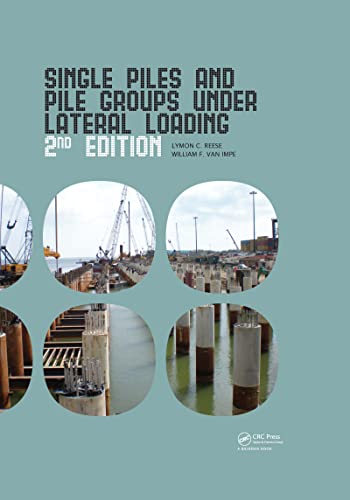 The complexities of designing piles for lateral loads are manifold as there are many forces that are critical to the design of big structures such as bridges, offshore and waterfront structures and retaining walls. The loads on structures should be supported either horizontally or laterally or in both directions and most structures have in common that they are founded on piles. To create solid foundations, the pile designer is driven towards finding the critical load on a certain structure, either by causing overload or by causing too much lateral deflection.

This second edition of Reese and Van Impe’s course book explores and explains lateral load design and procedures for designing piles and pile groups, accounting for the soil resistance, as related to the lateral deflection of the pile. It addresses the analysis of piles of varying stiffness installed into soils with a variety of characteristics, accounting for the axial load at the top of the pile and for the rotational restraint of the pile head. The presented method using load-transfer functions is currently applied in practice by thousands of engineering offices in the world. Moreover, various experimental case design examples, including the design of an offshore platform pile foundation are given to complement theory. The rich list of relevant publications will serve the user into further reading.

Designed as a textbook for senior undergraduate/graduate student courses in pile engineering, foundation engineering and related subjects, this set of book and CD-ROM will also benefit professionals in civil and mining engineering and in the applied earth sciences.

Professor Van Impe received his MSc and PhD degree in civil engineering at the Ghent University in Belgium where he has been professor of Geotechnics since 1982 and full professor since 1991. Prof. Van Impe has been an emeritus professor since March 2011 but remains active as a consultant and as manager of AGE bvba. He has been also a full professor at the Catholic University of Louvain in Belgium. He has a 35+ years long career in geotechnics.
He is a member of the Belgian Royal Academy of Overseas Sciences. He was elected Vice-President for Europe of the International Society for Soil Mechanics and Geotechnical Engineering (ISSMGE) in 1994, World President of ISSMGE in 2001 and the President of the umbrella society of the 3 geo-engineering sister societies FedIGS (Federation of the International Geo-Engineering Societies) in 2008. His main field of experience is deep foundations, ground improvement and soil parameter analysis, currently dealing mostly with crushable soils.