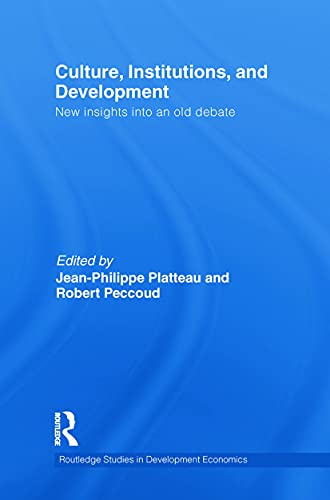 'Jean-Philippe Platteau's Culture, Institutions and Development makes a major contribution to development studies. Its wide-ranging essays explore the impact of such cultural factors as religion, tradition, the role of the family and ethnic ties on development. The essays are clear and to the point, and accessible to readers without an extensive technical background. This volume should prove of great interest to those involved in development studies from across the social sciences, as well as to development practitioners.'

Does culture matter? This question has taken on added significance since fundamentalist revivalism has recently gained ground in different parts of the world. The old controversy between Max Weber and Karl Marx, which centres around the extent to which cultural factors such as social norms and values affect economic growth is of critical importance, particularly because of its policy implications. Indeed, if culture is not an autonomous factor susceptible to influencing economic realities, it should not matter and public authorities can dispense with thinking about cultural interventions. On the other hand, if culture does have a real impact, the question arises as to whether it is conducive or detrimental to economic growth, political liberalization, and the emancipation of individuals among other things.

This collection offers a nuanced view that neither denies nor exaggerates the role of cultural factors in explaining relative growth performances across countries. Instead, the contributors focus on the dynamic, two-way relationship between culture and development in a way that stresses policy stakes and the value of multidisciplinary collaboration between economists, historians and other social scientists. This book will be of interest to postgraduates and researchers in all the social sciences, as well as to professionals working in national development agencies, international organisations, and Non-Governmental Organisations.

1. Culture, Institutions, and Development: New Insights Into an Old Debate

3. Culture, Institutions, and Development: New Insights into an Old Debate