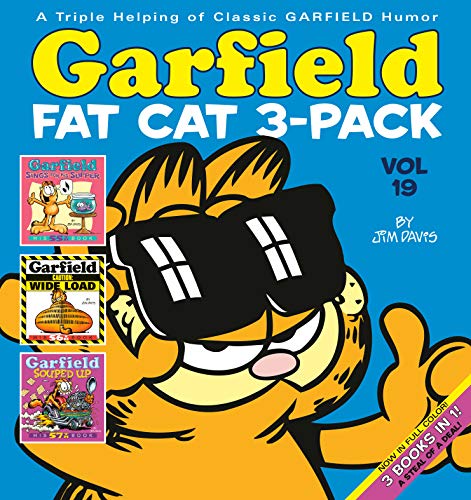 This rollicking collection includes three books in one: Garfield Sings for His Supper, Garfield Caution: Wide Load, and Garfield Souped Up.

Be it ever so crazy, there’s no place like home—especially at the Arbuckle asylum. Fashion fiascos abound! Dim-wittedness and droll rule the day! There’s so much bizarre behavior from Jon and Odie that sometimes Garfield even seems normal. Of course, that delusion doesn’t last for long. Soon, the quirky cat is conversing with a sock puppet and deflating a puffer fish (as well as an ice cream truck’s tires). It’s all in a kooky day’s play!

The GARFIELD FAT CAT 3-PACK series collects the GARFIELD comic-strip compilation books in a new, full-color format. Garfield may have gone through a few changes, but one thing has stayed the same: his enormous appetite for food and fun. So enjoy some supersized laughs with the insatiable cat, because too much fun is never enough!

Jim Davis was born on July 28, 1945, in Marion, Indiana. He later attended Ball State University in Muncie, Indiana, where he distinguished himself by earning one of the lowest cumulative grade point averages in the history of the university. The Garfield strip was born on June 19, 1978, syndicated in forty-one U.S. newspapers. Today it’s syndicated in more than 2,100 newspapers worldwide with more than 200 million readers, leading Guinness World Records to name Garfield The Most Widely Syndicated Comic Strip in the World. Davis has had many successes with Garfield, including four Emmy Awards for Outstanding Animated Program and induction into the Licensing Hall of Fame (1998), but his most prized awards are from his peers in the National Cartoonist Society: Best Humor Strip (1981 and 1985), the Elzie Segar Award (1990), and the coveted Reuben Award (1990) for overall excellence in cartooning.