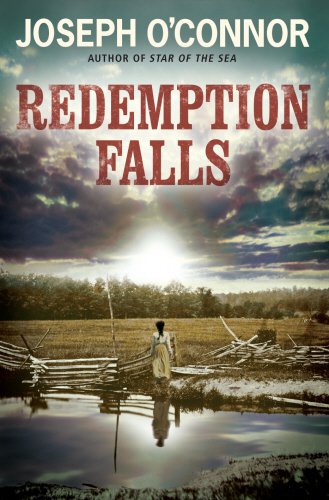 "A huge achievement, as deep as it is wide, this is a book like no other of these times - a panorama of tragic love set among people devastated by the American Civil War, brilliantly recounted in the multiple tones of their voices, writings and songs, and realised with an empathy both impressive and extraordinarily moving." (Nuala O'Faolain)

"Redemption Falls deals with a crucial period in the history of Ireland and the United States. The story is told with extraordinary ingenuity, the tone a mixture of the playful and the grave, at times fast-moving, smart and very clever, and then full of beautiful writing and heart-breaking sequences. The cadences of the competing voices in the book combine to produce a dazzling narrative." (Colm Toibin)

"Redemption Falls is a gem. It's a glorious book, enormous, virtuoso and brave. Its scope is wide - love, death, war, belonging - and yet its gaze is intimate. At its heart is the story of a woman who wants to return to the only country she has - her family. The language is at turns bawdy, ancient, poetic, grand and funny. One can't dismiss the genius that's involved in being able to tell such necessary stories in a time of war and still be able to beat back all the cliches. The minute I finished the book I wanted to start reading it all over again." (Colum McCann)

"This book took my breath away. If you're interested at all in the American Civil War, Irish participation in same, love, the expansion of the West, you'll delight in this novel. It is panoramic, yet dense and delicious in detail. It is written gloriously, as if Mr O'Connor toiled at some mighty cathedral organ containing the whole of the English language with its Irish and American flavourings. This is a brave book and only a brave heart could have written it." (Frank McCourt)

1865. The American Civil War is ending. Eighteen years after the famine ship Star of the Sea docked at New York, the daughter of two of her passengers sets out from Baton Rouge, Louisiana, on a walk across a devastated America. Eliza Duane Mooney is searching for a young boy she has not seen in four years, one of the hundred thousand children drawn into the war. His fate has been mysterious and will prove extraordinary.

It's a walk that will have consequences for many seemingly unconnected survivors: a love-struck cartographer, a haunted Latina poetess, rebel guerrilla Cole McLaurenson, runaway slave Elizabeth Longstreet and the mercurial revolutionary James Con O'Keeffe, who commanded a brigade of Irish immigrants in the Union Army and is now Governor of a western wilderness where nothing is as it seems.

Redemption Falls is a tale of war and forgiveness, of strangers in a strange land, of love put to the ultimate test. Packed with music, balladry, poetry and storytelling, this is a riveting historical novel of urgent contemporary resonance, from the author of the internationally bestselling Star of the Sea.

Buchbeschreibung Harvill Secker, 2007. Hardcover. Zustand: Used; Acceptable. Dispatched, from the UK, within 48 hours of ordering. The book is perfectly readable and fit for use, although it shows signs of previous ownership. The spine is likely creased and the cover scuffed or slightly torn. Textbooks will typically have an amount of underlining and/or highlighting, as well as notes. If this book is over 5 years old, then please expect the pages to be yellowing or to have age spots. Aged book. Tanned pages and age spots, however, this will not interfere with reading. Ripped/damaged jacket. The dust jacket of this book is slightly damaged/ripped, however, this does not affect the internal condition. Bestandsnummer des Verkäufers CHL6005884

Buchbeschreibung Harvill Secker 03/05/2007, 2007. Zustand: Very Good. This book is in very good condition and will be shipped within 24 hours of ordering. The cover may have some limited signs of wear but the pages are clean, intact and the spine remains undamaged. This book has clearly been well maintained and looked after thus far. Money back guarantee if you are not satisfied. See all our books here, order more than 1 book and get discounted shipping. . Bestandsnummer des Verkäufers 7719-9780436205699

Buchbeschreibung Harvill Secker 03/05/2007, 2007. Zustand: Very Good. Shipped within 24 hours from our UK warehouse. Clean, undamaged book with no damage to pages and minimal wear to the cover. Spine still tight, in very good condition. Remember if you are not happy, you are covered by our 100% money back guarantee. Bestandsnummer des Verkäufers 6545-9780436205699

Buchbeschreibung Harvill Secker, 2007. Hardcover. Zustand: Used; Good. **Simply Brit** Shipped with Premium postal service within 24 hours from the UK with impressive delivery time. We have dispatched from our book depository; items of good condition to over ten million satisfied customers worldwide. We are committed to providing you with reliable and efficient service at all times. Bestandsnummer des Verkäufers mon0000462967

Buchbeschreibung Harvill Secker, 2007. Hardcover. Zustand: Used; Good. stains on the side. **SHIPPED FROM UK** We believe you will be completely satisfied with our quick and reliable service. All orders are dispatched as swiftly as possible! Buy with confidence! Aloysius Ihezie. Bestandsnummer des Verkäufers 3794623

Buchbeschreibung Harvill Secker, 2007. Hardcover. Zustand: Used; Good. **SHIPPED FROM UK** We believe you will be completely satisfied with our quick and reliable service. All orders are dispatched as swiftly as possible! Buy with confidence! Aloysius Ihezie. Bestandsnummer des Verkäufers mon0001416709

Buchbeschreibung Paperback. Zustand: Very Good. The book has been read, but is in excellent condition. Pages are intact and not marred by notes or highlighting. The spine remains undamaged. Bestandsnummer des Verkäufers GOR001469959