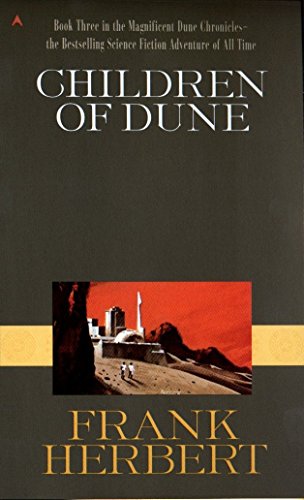 Críticas:
Praise for Children of Dune "A major event."--Los Angeles Times "Ranging from palace intrigue and desert chases to religious speculation and confrontations with the supreme intelligence of the universe, there is something here for all science fiction fans."--Publishers Weekly "Herbert adds enough new twists and turns to the ongoing saga that familiarity with the recurring elements brings pleasure."--Challenging Destiny Praise for Dune "I know nothing comparable to it except Lord of the Rings."--Arthur C. Clarke "A portrayal of an alien society more complete and deeply detailed than any other author in the field has managed...a story absorbing equally for its action and philosophical vistas."--The Washington Post Book World "One of the monuments of modern science fiction."--Chicago Tribune "Powerful, convincing, and most ingenious."--Robert A. Heinlein "Herbert's creation of this universe, with its intricate development and analysis of ecology, religion, politics and philosophy, remains one of the supreme and seminal achievements in science fiction."--Louisville Times
Reseńa del editor:
On the planet of Aurakis, men, nature, and time attend the messianic and evolutionary growth of Leto and his twin sister Ghanima, children and successors of the mighty Muad'Dib. Reissue. (A Sci-Fi Channel television miniseries, showing March 2003) (Science Fiction & Fantasy)