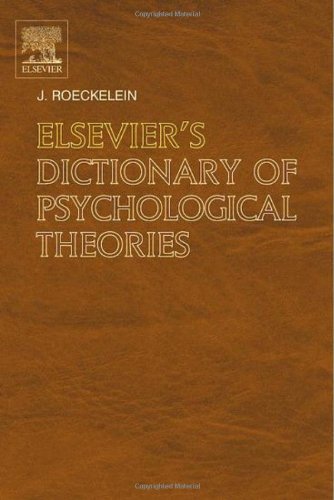 In attempting to understand and explain various behaviour, events, and phenomena in their field, psychologists have developed and enunciated an enormous number of ‘best guesses’ or theories concerning the phenomenon in question. Such theories involve speculations and statements that range on a potency continuum from ‘strong’ to ‘weak’. The term theory, itself, has been conceived of in various ways in the psychological literature.
In the present dictionary, the strategy of lumping together all the various traditional descriptive labels regarding psychologists ‘best guesses’ under the single descriptive term theory has been adopted. The descriptive labels of principle, law, theory, model, paradigm, effect, hypothesis and doctrine are attached to many of the entries, and all such descriptive labels are subsumed under the umbrella term theory.
The title of this dictionary emphasizes the term theory (implying both strong and weak best guesses) and is a way of indication, overall, the contents of this comprehensive dictionary in a parsimonious and felicitous fashion.
The dictionary will contain approximately 2,000 terms covering the origination, development, and evolution of various psychological concepts, as well as the historical definition, analysis, and criticisms of psychological concepts. Terms and definitions are in English.

*Contains over 2,000 terms covering the origination, development and evolution of various psychological concepts
*Covers a wide span of theories, from auditory, cognitive tactile and visual to humor and imagery
*An essential resource for psychologists needing a single-source quick reference

Jon E. Roeckelein is Professor of Psychology at Mesa College in Mesa, Arizona. A former staff intelligence officer and research psychologist for the U. S. Army, he has taught psychology and conducted psychological research for more than thirty years, including teaching positions at Mesa College, American University, and Arizona State University, and research on intelligence systems for the U. S. Army/Department of Defense at the Human Resources Research Office and the Behavioral Systems Research Laboratory/Army Research Institute. His published books include Elsevier’s Dictionary of Psychological Theories (Elsevier, 2006), Imagery in Psychology (Praeger, 2004), The Psychology of Humor (Greenwood, 2002), The Concept of Time in Psychology (Greenwood, 2000), and Dictionary of Theories, Laws, and Concepts in Psychology (Greenwood, 1998).