The Bridges at Toko Ri 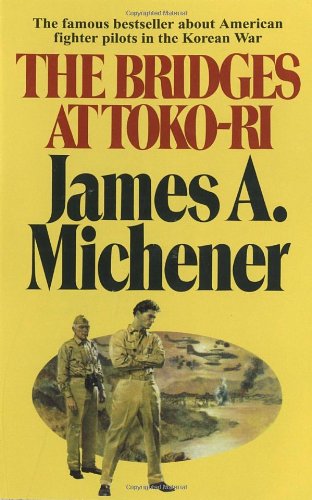 In one of his beloved early bestsellers, Pulitzer Prize–winning author James A. Michener crafts a tale of the American men who fought the Korean War, detailing their exploits in the air as well as their lives on the ground. Young and innocent, they arrive in a place they have barely ever heard of, on a ship massive enough to carry planes and helicopters. Trained as professionals, they prepare for the rituals of war that countless men before them have endured, and face the same fears. They are American fighter pilots. Together they face an enemy they do not understand, knowing their only hope for survival is to win.

Praise for The Bridges at Toko-Ri

“A vivid and moving story, as well as an exciting one . . . The humanity of the people is deeply felt.”—Chicago Tribune

“The Banshees screaming over Korea, the perilous landings on an aircraft carrier deck ‘bouncing around like a derelict rowboat,’ a helicopter rescue from the freezing waters . . . all are stirringly rendered.”—The Denver Post

nocent, they came to a place they had barely heard of, prepared for war. They were American fighter pilots, trained but frightened, facing an an enemy they couldn't understand, and waging a war they had to win....

1. The Bridges at Toko-Ri

2. THE BRIDGES AT TOKO-RI

3. The Bridges at Toko-Ri