The Malaria Project: The U.S. Government's Secret Mission to Find a Miracle Cure 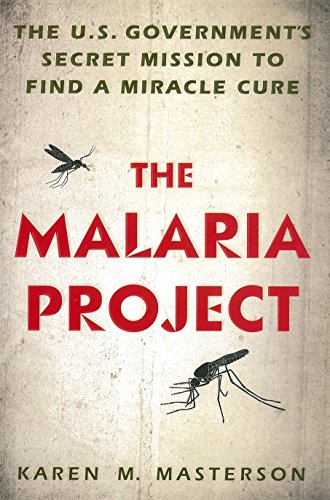 A fascinating and shocking historical exposé, The Malaria Project is the story of America's secret mission to combat malaria during World War IIa campaign modeled after a German project which tested experimental drugs on men gone mad from syphilis.

American war planners, foreseeing the tactical need for a malaria drug, recreated the German model, then grew it tenfold. Quickly becoming the biggest and most important medical initiative of the war, the project tasked dozens of the country’s top research scientists and university labs to find a treatment to remedy half a million U.S. troops incapacitated by malaria.

Spearheading the new U.S. effort was Dr. Lowell T. Coggeshall, the son of a poor Indiana farmer whose persistent drive and curiosity led him to become one of the most innovative thinkers in solving the malaria problem. He recruited private corporations, such as today's Squibb and Eli Lilly, and the nation’s best chemists out of Harvard and Johns Hopkins to make novel compounds that skilled technicians tested on birds. Giants in the field of clinical research, including the future NIH director James Shannon, then tested the drugs on mental health patients and convicted criminalsincluding infamous murderer Nathan Leopold.

By 1943, a dozen strains of malaria brought home in the veins of sick soldiers were injected into these human guinea pigs for drug studies. After hundreds of trials and many deaths, they found their magic bullet,” but not in a U.S. laboratory. America 's best weapon against malaria, still used today, was captured in battle from the Nazis. Called chloroquine, it went on to save more lives than any other drug in history.

Karen M. Masterson is a former political reporter for the Washington Bureau of theHouston Chronicle who left newspapers to pursue her interests in microbiology. On a teaching fellowship at Johns Hopkins University, she stumbled upon the story inThe Malaria Project while researching at the National Archives. In 2005, she won a Knight journalism fellowship to study malaria at the U.S. Center for Disease Control and Prevention in Atlanta and in rural Tanzania. She has a Master’s of Journalism from the University of Maryland and an MA in science writing from Johns Hopkins University’s acclaimed Writing Seminars. She lives with her husband and twin daughters outside Washington, D. C.

1. Malaria Project, The : The U.S. Government's Secret Mission to Find a Miracle Cure

2. The Malaria Project: The U.S. Government's Secret Mission to Find a Miracle Cure

3. The Malaria Project: The U.S. Government's Secret Mission to Find a Miracle Cure