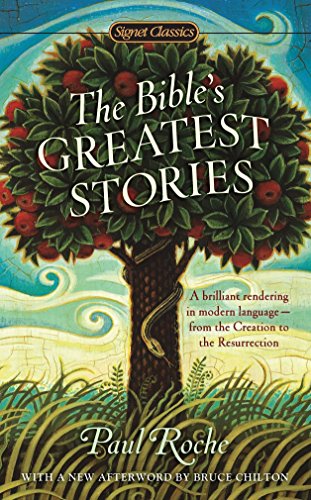 From the awe-inspiring story of the Creation to the defeats and triumphs of the Children of Israel and the life, death, and Resurrection of Jesus, here are the greatest accounts from the greatest book ever written, presented in an accessible form for contemporary readers. Enhanced with annotations, Paul Roche’s brilliant retelling of these stories is at once impeccably accurate and vibrantly rendered. He brings to life the saga of Joseph and the coat of many colors, the drama of the fall of Jericho, the heroism of a young David fighting Goliath and the lust of an older David for Bathsheba, the glory and wisdom of Solomon, the bravery of Judith, the dark despair of Job, the faith of Daniel in the lion’s den, the joy of the Nativity, and the miracle of the Resurrection. These are just a few of the many great biblical stories presented in this masterful translation by a distinguished poet and scholar.

Translated and with an introduction by Paul Roche and a new afterword by Bruce Chilton.

Paul Roche, a distinguished English poet and translator, is the author of The Bible’s Greatest Stories. His other translations include Euripides: Ten Plays, Oedipus Plays of Sophocles, and The Orestes Plays of Aeschylus.
Bruce Chilton received his doctoral degree from Cambridge University for his research on early Christianity and Judaism. He wrote the first critical commentary on the Aramaic version of Isaiah (The Isaiah Targum, 1987), as well as studies that analyze Jesus in the context of Judaism (culminating in the bestselling Rabbi Jesus, 2000). He has taught in Europe at the Universities of Cambridge, Sheffield, and Münster, and in the United States at Yale University (as the first Lillian Claus Professor of New Testament) prior to his current appointment at Bard College as Bernard Iddings Bell Professor of Religion. His recent publications include The Way of Jesus (2010) and Abraham’s Curse (2008).