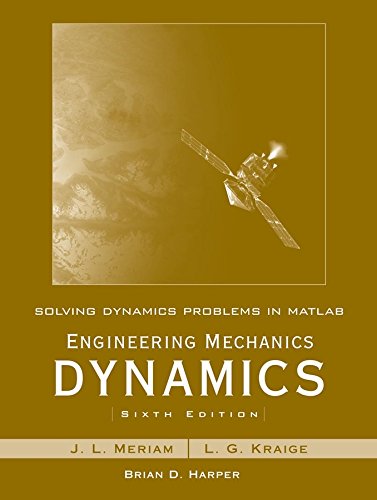 An introduction to MATLAB for engineering students, complete with practice problems Written as a complement to Engineering Mechanics Dynamics, this book provides students with an introduction to MATLAB as well as example problems that correspond to the aforementioned text. The book covers numerical calculations, defining functions, graphics, symbolic calculations, differentiation and integration, and solving equations with MATLAB and then presents problems in seven subsequent chapters. These cover kinematics of particles, kinetics of particles, kinetics of systems of particles; plane kinematics of rigid bodies; plane kinetics of rigid bodies, three-dimensional dynamics of rigid bodies, and vibration and response time.

Dr. James L. Meriam has contributed to the field of engineering mechanics as one of the premier engineering educators during the second half of the twentieth century. Dr. Meriam earned his B.E., M. Eng., and Ph.D. degrees from Yale University. He had early industrial experience with Pratt and Whitney Aircraft and the General Electric Company. During the Second World War, he served in the U.S. Coast Guard. He was a member of the faculty of the University of California-Berkeley, Dean of Engineering at Duke University, a faculty member at the California Polytechnic State University, and visiting professor at the University of California-Santa Barbara. He retired in 1990. Professor Meriam always placed great emphasis on teaching, and this trait was recognized by his students wherever he taught. At Berkeley in 1963, he was the first recipient of the Outstanding Faculty Award of Tau Beta Pi, given primarily for excellence in teaching. In 1978, he received the Distinguished Educator Award for Outstanding Service to Engineering Mechanics Education from the American Society for Engineering Education, and in 1992 was the Society's recipient of the Benjamin Garver Lamme Award, which is ASEE's highest annual national award. Dr. L. G. Kraige, coauthor of the Engineering Mechanics series since the early 1980s, has also made significant contributions to mechanics education. Dr. Kraige earned his B.S., M.S., and Ph.D. degrees at the University of Virginia, principally in aerospace engineering, and he currently serves as Professor of Engineering Science and Mechanics at Virginia Polytechnic Institute and State University. In addition to his widely recognized research and publications in the field of spacecraft dynamics, Professor Kraige has devoted his attention to the teaching of mechanics at both introductory and advanced levels. His outstanding teaching has been widely recognized and has earned him teaching awards at the departmental, college, university, state, regional, and national levels. These include the Francis J. Maher Award for excellence in education in the Department of Engineering Science and Mechanics, the Wine Award for excellence in university teaching, and the Outstanding Educator Award from the State Council of Higher Education for the Commonwealth of Virginia. In 1996, the Mechanics Division of ASEE bestowed upon him the Archie Higdon Distinguished Educator Award. The Carnegie Foundation for the Advancement of Teaching and the Council for Advancement and Support of Education awarded him the distinction of Virginia Professor of the Year for 1997. During 2004-2006, he held the W. S. "Pete" White Chair for Innovation in Engineering Education, and in 2006 he teamed with Professors Scott L. Hendricks and Don H. Morris as recipients of the XCaliber Award for Teaching with Technology. In his teaching, Professor Kraige stresses the development of analytical capabilities along with the strengthening of physical insight and engineering judgment. Since the early 1980s, he has worked on personal-computer software designed to enhance the teaching/learning process in statics, dynamics, strength of materials, and higher level areas of dynamics and vibrations.