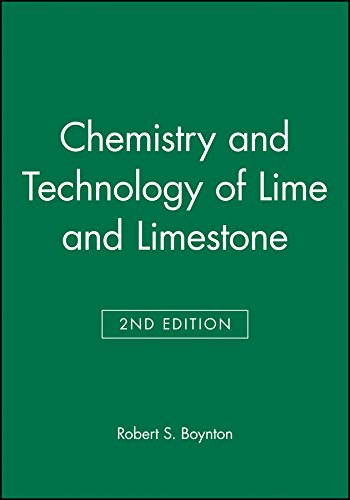 Principles of Industrial Chemistry Chris A. Clausen III & Guy Mattson The first book specifically designed to help the academically trained chemist make the transition to the real world of industry. It uses process development as a general theme to provide information normally acquired only through on-the-job training. The authors trace an industrial chemical process from idea stage to fully operational plant, discuss concepts in unit operation and their applications, and deal with such subjects as material accounting, energy accounting, mass transport, heat transfer, principles of kinetics, separation methods, instrumentation, economic concepts, and patent procedures. A valuable overview and insight into the industry. 1978 The Chemistry of Silica Solubility, Polymerization, Colloid and Surface Properties, and Biochemistry Ralph K. Iler Silica, the major component of the earth's solid surface, the constituent of ordinary sand, and an essential material in many forms of life, is involved in many phases of modern technology and science. Its role in human disease, aging, and health is just beginning to be explored. Here is a comprehensive account of the basic chemistry involved in a wide range of research and development activities. Also a wealth of information on production and production control. Anyone involved with R&D or production in the many diverse fields and industries in which silica plays a vital role--chemistry, biology, medicine, agriculture, metallurgy, and mining--will find this book an invaluable reference. 1979 Fourth Edition of Faith, Keyes & Clark's Industrial Chemicals Frederick A. Lowenheim & Marguerite K. Moran The latest updated edition of a manual whose popularity for a quarter-century attests to its usefulness as a handy reference--a concise, quick-study source of essential information on 145 commonly used chemicals. For each of them, the book covers such subjects as reaction and yield or recovery; material and energy requirements by quantities; detailed explanation of the process involved (with illustrations and flow diagram); uses of the end product and important by-products; economics of production; specifics on properties, grades, containers and regulations; list of manufacturers and plant locations; and volume of production and price ranges over the past two decades. A valuable time-saver. 1975

Soon after the first edition of this book appeared in 1966, it was acclaimed as the "bible" of the lime and limestone industry. Certainly it was the most comprehensive and authoritative study of the subject, an indispensable reference text for chemists, engineers, and researchers, as well as designers of plants and equipment for both this industry and the many others which employed its products in the U.S. and abroad. So valuable was it considered by the mammoth Nippon Steel Corporation of Japan, for instance, that the company at prodigious expense translated it into Japanese for that country?s own steel, quarry, lime and cement facilities. In the intervening years, however, extensive technological developments?largely the result of environmental impact and energy constraints, inflation, and industry growth?have created the need for this new, updated version, one which has been so drastically revised and rewritten as to become virtually a new book. Here, then, is the timely second edition of Boynton?s classic Chemistry and Technology of Lime and Limestone. It surveys the technological state-of-the-art worldwide, particularly in the U.S., Germany, and Japan. Like the first edition, its emphasis is less on theory than on such practical considerations as the extraction and manufacture of lime and limestone, uses, and applications. And unlike many other technical books, it offers valuable insights into the personality of the industry?its problems and limitations, its statistical trends, and how business is actually done. For anyone who is or wants to be a part of the lime/limestone industry, this is clearly the one book to own, read, and refer to.

1. Chemistry and Technology of Lime and Limestone, 2nd Edition

3. Chemistry and Technology of Lime and Limestone

4. Chemistry and Technology of Lime and Limestone

7. CHEMISTRY AND TECHNOLOGY OF LIME

8. CHEMISTRY AND TECHNOLOGY OF LIME

9. Chemistry and Technology of Lime and Limestone (Information & Resources Series)