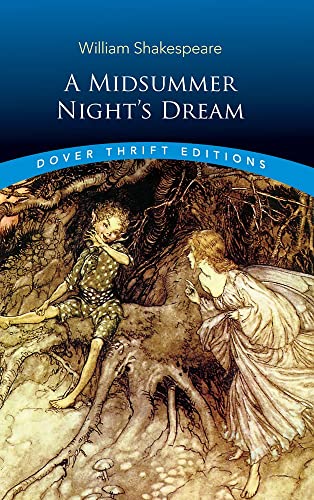 Among the most popular of all Shakespeare's comedies, this play humorously celebrates the vagaries of love. With its several pairs of lovers, on-again, off-again romances, magic spells, fairies, and a bumbling troupe of would-be actors, the play continues to enchant audiences. Unabridged reprint of an authoritative British edition, complete with explanatory footnotes.

Perhaps the most popular of all of Shakespeare's comedies, A Midsummer Night's Dream humorously celebrates the vagaries of love. The approaching wedding festivities of Theseus, Duke of Athens, and his bride-to-be, Hippolyta, Queen of the Amazons, are delightfully crisscrossed with in-again, off-again romances of two young pairs of Athenian lovers; a fateful rivalry between the King and Queen of the Fairies; and the theatrical aspirations of a bumbling troupe of Athenian laborers. It all ends happily in wedding-night revelry complete with a play-within-a-play presented by the laborers to the ecstatic amusement of all. This edition, complete with explanatory footnotes, is reprinted from a standard British edition.