From X-rays to Quarks (Dover Classics of Science & Mathematics) 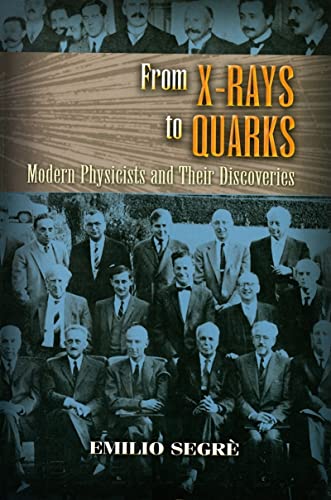 A Nobel Laureate offers impressions and recollections of the development of modern physics. Rather than a chronological approach, Segrč emphasizes interesting, complex personalities who often appear only in footnotes. Readers will find that this book adds considerably to their understanding of science and includes compelling topics of current interest. 1980 edition.

Emilio G. Segrè: The History of Physics
Emilio Segrè (1905–1989) became, in 1928, the first student to earn a doctorate in physics at The University of Rome under Enrico Fermi. A decade later, restrictive fascist laws against Jews in academic positions in Italy turned Segrè into an academic refugee — he settled in Berkeley where, in 1955, with colleague Owen Chamberlain, he proved the existence of the antiproton, a negatively charged proton that destroys itself as well as the matter it strikes. In 1959, Segrè and Chamberlain shared the Nobel Prize for Physics for their work on antiproton.
From 1943 to 1946, Segrè worked as a group leader on the Manhattan Project at Los Alamos. In his 1970 book about Fermi, Segrè recalled a crucial atomic test in the New Mexico desert: "In a fraction of a second, at our distance, one received enough light to produce a sunburn. I was near Fermi at the time of the explosion, but I do not remember what we said, if anything. I believed that for a moment I thought the explosion might set fire to the atmosphere and thus finish the earth, even though I knew that this was not possible."
It always seems an opportunity that should not be missed when a major participant in the world of science takes the time and makes the effort to write about his field for a general audience. At Dover we were very pleased to acquire from Emilio Segrè's heirs the rights to publish his outstanding two-volume history of physics written for the general reader and historian of science: From Falling Bodies to Radio Waves: Classical Physicists and Their Discoveries and From X-Rays to Quarks: Modern Physicists and Their Discoveries, both reprinted by Dover in 2007.

1. From X-rays to Quarks: Modern Physicists and Their Discoveries (Dover Classics of Science & Mathematics)

2. From X-rays to Quarks: Modern Physicists and Their Discoveries (Dover Classics of Science & Mathematics)

3. From X-rays to Quarks: Modern Physicists and Their Discoveries (Dover Classics of Science & Mathematics)

4. FROM X-RAYS TO QUARKS: MODERN PH

5. FROM X-RAYS TO QUARKS: MODERN PH

6. From X-rays to Quarks: Modern Physicists and Their Discoveries