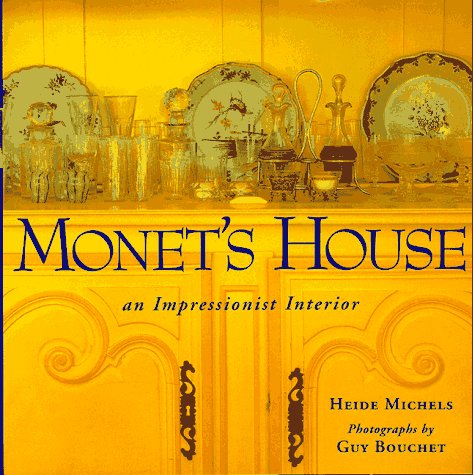 Offers a tour of Monet's house in Giverny, France, where he lived for forty years, with information about colors used, allowing readers to duplicate the look in their own home

It is a summer's day in the late 1890s and Monet's house at Giverny is in its heyday. Outside, the pink stucco walls are punctuated by brilliant green shutters, and a new green balcony spans the length of the house. Inside, light streams through open windows, illuminating the vibrant, innovative colors Monet chose to color his rooms.

Here is a guided tour of the house where Monet lived for forty years with the woman who would become his second wife, Alice Hoschedé, and their eight children. The original furniture, much of it painted in vivid hues, is here as well as appointments--china, linen, and small antique collectibles--authentic to what is known of Monet's lifestyle and the period.

Here is the famous dining room painted in two shades of yellow, embellished with Japanese prints and blue-and-white china. Here is the kitchen with its blue- and-white Rouen tiles and copper pots, the fabled studio where Monet not only painted but entertained his family and friends, the blue drawing room where the family gathered for games, the bedrooms and dressing rooms with their simple and elegant appointments, the foyers, the épicerie, even the cellar where wine and provisions were stored. Paint dabs showing the colors used in major rooms allow the reader to duplicate them in their own homes.

Heide Michels opens a door onto Monet's private world, giving us a vivid impression of the family's day-to-day routine, including family activities and mealtime rituals. She describes Monet's love of the good life; good food, good wine, and the company of stimulating friends, among them Monet's fellow painters, Renoir and Caillebotte, and a circle of writers and critics.

Monet's House reveals the artist as a master decorator as innovative in his choice of wall and furniture colors as he was in his canvases. It also captures a vivid picture of domestic life as it was lived by one of the world's greatest Impressionist painters.