Error and Inference Paperback: Recent Exchanges on Experimental Reasoning, Reliability, and the Objectivity and Rationality of Science

Error and Inference Paperback: Recent Exchanges on Experimental Reasoning, Reliability, and the Objectivity and Rationality of Science 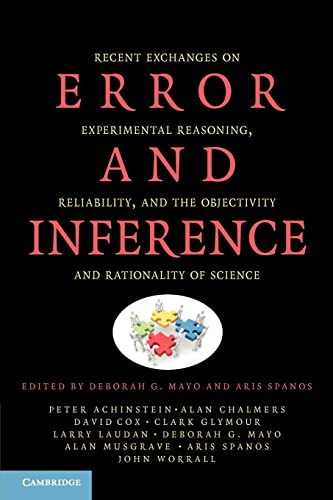 'Mayo and Spanos's collection has injected new ideas into the study of scientific inference. This book offers a welcome bridge between current philosophy of science and scientific practice, providing the reader with new insights on important topics such as statistical inference, reliability, theory testing, causal modeling, and the relation between theory and experiment. The book will have a wide and enthusiastic readership among philosophers and scientists.' Cristina Bicchieri, University of Pennsylvania

'Error and Inference straddles philosophy and practice; its lessons should be taken seriously in both. The editors suppose that venerable philosophical problems surrounding induction, scientific inference, and objectivity can be solved. The essays in the book give support to that perspective. They also show that pressing practical problems of scientific inference and testing gain marked benefit from careful attention to philosophers' accounts of what makes for evidence, rationality, and objectivity.' Nancy Cartwright, London School of Economics

'The error-probabilistic approach developed by Deborah Mayo and Aris Spanos is the main alternative to Bayesianism in contemporary philosophy of science. In this superb volume Mayo and Spanos face their critics and show that error-probabilism is able to solve most theoretical puzzles of statistical testing. If some issue in the field of inductive inference is bothering you, you will probably find an answer in this book.' Francesco Guala, University of Milan

'Mayo, an empirically minded philosopher, and Spanos, a philosophically minded economist, have succeeded beautifully in orchestrating a lively debate over methodological issues related to statistics and empirical testing that - unlike too much of the philosophy of science - speaks to the genuine issues that the practitioners of empirical sciences face daily. Their important volume deserves a broad readership.' Kevin Hoover, Duke University

'Mayo and Spanos continue their campaign to bring confirmation theory face-to-face with the methods of scientists, and now extend it to the history of science and to general theories too. This book begins with a fine introduction to Mayo's error-statistical approach that makes the book a useful teaching tool. But then it carries forward the discussion of this approach with challenging papers from Glymour, Laudan, Achinstein, Worrall, and others.' Alexander Rosenberg, Duke University

'This is a wonderful volume. It contains original and stimulating essays by leading figures from both philosophy and statistics on notions of evidence and testing; on how these interact with ideas about causation, explanation, and scientific rationality; and much more besides. The volume also features detailed and illuminating exchanges between the contributors. A must-read for anyone with an interest in these topics.' Jim Woodward, California Institute of Technology

Deborah G. Mayo is a professor in the Department of Philosophy at Virginia Polytechnic Institute and State University, known as Virginia Tech, and holds a visiting appointment in the Center for the Philosophy of Natural and Social Science at the London School of Economics. She is the author of Error and the Growth of Experimental Knowledge, which in 1998 won the Lakatos Prize, awarded for the most outstanding contribution to philosophy of science during the previous six years. Professor Mayo coedited the volume Acceptable Evidence: Science and Values in Risk Management (1991, with R. Hollander) and has published numerous articles on the philosophy and history of science and foundations of statistics and experimental inference and in interdisciplinary works on evidence relevant for regulation and policy.

1. Error and Inference : Recent Exchanges on Experimental Reasoning, Reliability, and the Objectivity and Rationality of Science

2. Error and Inference: Recent Exchanges on Experimental Reasoning, Reliability, and the Objectivity and Rationality of Science (Paperback or Softback)

4. Error and Inference: Recent Exchanges on Experimental Reasoning, Reliability, and the Objectivity and Rationality of Science (Paperback)

Buchbeschreibung CAMBRIDGE UNIVERSITY PRESS, United Kingdom, 2010. Paperback. Zustand: New. Language: English. Brand new Book. Although both philosophers and scientists are interested in how to obtain reliable knowledge in the face of error, there is a gap between their perspectives that has been an obstacle to progress. By means of a series of exchanges between the editors and leaders from the philosophy of science, statistics and economics, this volume offers a cumulative introduction connecting problems of traditional philosophy of science to problems of inference in statistical and empirical modelling practice. Philosophers of science and scientific practitioners are challenged to reevaluate the assumptions of their own theories - philosophical or methodological. Practitioners may better appreciate the foundational issues around which their questions revolve and thereby become better 'applied philosophers'. Conversely, new avenues emerge for finally solving recalcitrant philosophical problems of induction, explanation and theory testing. Bestandsnummer des Verkðufers AAV9780521180252

6. Error and Inference: Recent Exchanges on Experimental Reasoning, Reliability, and the Objectivity and Rationality of Science

7. Error and Inference: Recent Exchanges on Experimental Reasoning, Reliability, and the Objectivity and Rationality of Science

8. Error and Inference : Recent Exchanges on Experimental Reasoning, Reliability, and the Objectivity and Rationality of Science

Buchbeschreibung 2010. Paperback. Zustand: NEW. 9780521180252 This listing is a new book, a title currently in-print which we order directly and immediately from the publisher. For all enquiries, please contact Herb Tandree Philosophy Books directly - customer service is our primary goal. Bestandsnummer des Verkðufers HTANDREE0450157