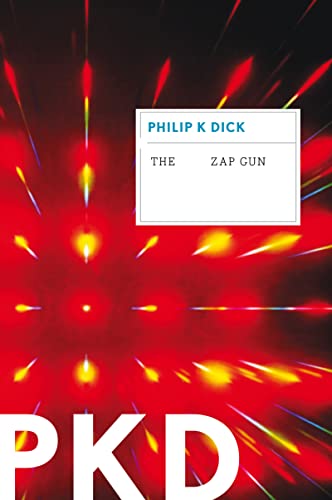 In this biting satire, the Cold War may have ended, but the eastern and western governments never told their citizens. Instead they created an elaborate ruse, wherein each side comes up with increasingly outlandish doomsday weapons—weapons that don’t work. But when aliens invade, the top designers of both sides have to come together to make a real doomsday device—if they don’t kill each other first.

With its combination of romance, espionage, and alien invasion, The Zap Gun skewers the military-industrial complex in a way that’s as relevant today as it was at the height of the Cold War.

Over a writing career that spanned three decades, PHILIP K. DICK (1928–1982) published 36 science fiction novels and 121 short stories in which he explored the essence of what makes man human and the dangers of centralized power. Toward the end of his life, his work turned to deeply personal, metaphysical questions concerning the nature of God. Eleven novels and short stories have been adapted to film, notably, Blade Runner (based on Do Androids Dream of Electric Sheep?), Total Recall, Minority Report, and A Scanner Darkly. The recipient of critical acclaim and numerous awards throughout his career, Dick was inducted into the Science Fiction Hall of Fame in 2005, and in 2007 the Library of America published a selection of his novels in three volumes. His work has been translated into more than twenty-five languages.