Verwandte Artikel zu A Short History Of Nearly Everything (Bryson)

Bryson, Bill A Short History Of Nearly Everything (Bryson)

A Short History Of Nearly Everything (Bryson) 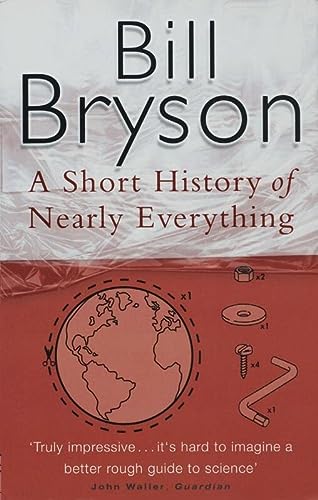 "Mr Bryson has a natural gift for clear and vivid expression. I doubt that a better book for the layman about the findings of modern science has been written" (Sunday Telegraph)

"A fascinating idea, and I can't think of many writers, other than Bryson, who would do it this well. It's the sort of book I would have devoured as a teenager. It might well turn unsuspecting young readers into scientists. And the famous, slightly cynical humour is always there" (Evening Standard)

"A genuinely useful and readable book. There is a phenomenal amount of fascinating information packed between its covers ... A thoroughly enjoyable, as well as educational, experience. Nobody who reads it will ever look at the world around them in the same way again" (Daily Express)

"Of course, there are people much better qualified than Bill Bryson to attempt a project of this magnitude. None of them, however, can write fluent Brysonese, which, as pretty much the entire Western reading public now knows, is an appealing mixture of self-deprecation, wryness and punnery" (Spectator)

"The very book I have been looking for most of my life... Bryson wears his knowledge with aplomb and a lot of very good jokes" (Daily Mail)

Bill Bryson describes himself as a reluctant traveller: but even when he stays safely in his own study at home, he can't contain his curiosity about the world around him. A Short History of Nearly Everything is his quest to find out everything that has happened from the Big Bang to the rise of civilization - how we got from there, being nothing at all, to here, being us.

Bill Bryson's challenge is to take subjects that normally bore the pants off most of us, like geology, chemistry and particle physics, and see if there isn't some way to render them comprehensible to people who have never thought they could be interested in science. It's not so much about what we know, as about how we know what we know. How do we know what is in the centre of the Earth, or what a black hole is, or where the continents were 600 million years ago? How did anyone ever figure these things out?

On his travels through time and space, he encounters a splendid collection of astonishingly eccentric, competitive, obsessive and foolish scientists, like the painfully shy Henry Cavendish who worked out many conundrums like how much the Earth weighed, but never bothered to tell anybody about many of his findings. In the company of such extraordinary people, Bill Bryson takes us with him on the ultimate eye-opening journey, and reveals the world in a way most of us have never seen it before.

1. A Short History of Nearly Everything

3. A Short History of Nearly Everything

4. A Short History of Nearly Everything Bryson, Bill