The Rotten Heart of Europe: the Dirty Wa: Dirty War for Europe's Money 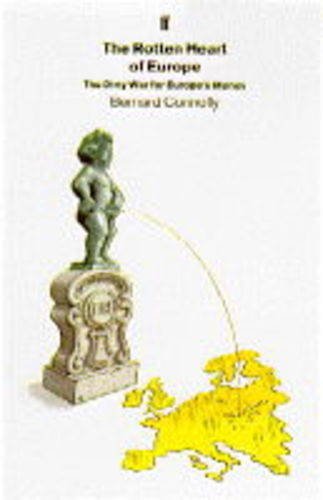 Shelf wear to dust jacket, page edges tanned. Shipped from the U.K. All orders received before 3pm sent that weekday.

The European Exchange Rate Mechanism has affected all our lives. Monetary union, the ERM's offspring, would affect us even more. The Rotten Heart of Europe, exposes the doubletalk surrounding the efforts of politicians, bankers and bureaucrats to force Europe into a crippling monetary straitjacket. Hidden agendas are laid bare, skulduggery exposed and economic fallacies are skewered in a devastating account of the confidence trick played on Europe by the would-be 'monetary masters of the world'.
Bernard Connolly could hardly have been better placed to write the inside story of the dirty war for Europe's money. For years he has been at the heart of the ERM, as head of the Commission unit responsible for monitoring and servicing the system. Respected by academics, officials and financial market players for his economic expertise and his straight talking, he writes with a deep commitment to restoring the right of the peoples of Europe to order their own affairs. It is this commitment which makes his portrait of the sinister motives and back-to-front reasoning of many Euro-propagandists so powerful and convincing.
The Rotten Heart of Europe is written with a sureness of economic understanding and a depth of political insight that make the arcane world of European monetary politics accessible. It is a dark story leavened with humour and informed with passion - a passion to tell the true story of a mechanism as politically damaging as it is economically perverse, and of the march to Monetary Union that, the author argues, 'is a threat not only to our prosperity but also to our liberties and, ultimately, to our peace'. No one who wants to understand how Britain has been taken for a ride by the proponents of federalism, and why Europe is economically underperforming and politically imploding, can afford to miss this enthralling and disturbing book.

Aiming to destroy illusions about what lies at the heart of Europe, this book provides answers to questions about European monetary union. The author, who is head of the Commission unit responsible for monitoring and servicing the ERM, offers a portrait of the motives of many Euro-propagandists. The book addresses topics such as the real motives underlying the Franco-German determination to suck European countries into the monetary union, why the French and Germans are applying intense pressure to recreate an exchange-rate agreement despite the political conflict and economic disarray that its earlier incarnation caused, and how so determined a leader as Margaret Thatcher could find herself forced into submission on the ERM.

1. The Rotten Heart of Europe: The Dirty War for Europe's Money

2. The Rotten Heart of Europe: The Dirty War for Europe's Money Connolly, Bernard

3. The Rotten Heart of Europe: The Dirty War for Europe's Money Connolly, Bernard

4. The Rotten Heart of Europe: The Dirty War for Europe's Money