Gordon, Robert It Came from Memphis

It Came from Memphis 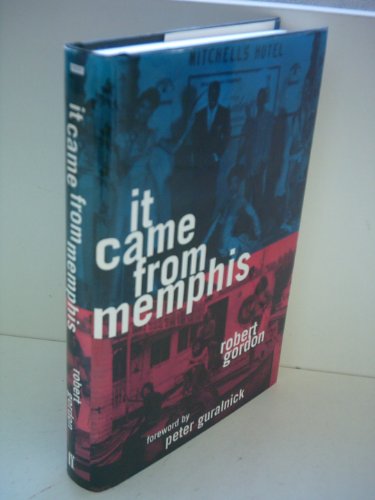 Delta bluesmen, a peanut vendor, a matinee cowboy, a professional wrestler, a manic deejay - these were the intersections where cultures collided in Memphis, Tennessee, in the 1950s. It Came from Memphis documents through firsthand accounts how an audience of white teenagers, caught in the middle of this extraordinary confluence of music, entrepreneurship, and eccentricity, broke through the walls of institutional racism and helped usher in a new musical form called rock and roll.
Beginning with notorious deejay Dewey Philips and his show "Red, Hot & Blue," It Came from Memphis is a rollicking tale of street-corner jug bands, shady West Memphis, nightclubs, first bands and first hits, of hippie puppet shows and outdoor music festivals, and of learning the ropes of the music biz as the ropes were strung. It is also the story of how a generation of Southern white kids befriended a generation of Mississippi Delta blues artists, and what happened to Memphis and the music industry when these two ostracized cultures met and found mutual inspiration on society's margin.
Unlike previous books about Memphis, this one does not focus on Elvis Presley, Al Green, Sun and Stax studios. Instead, It Came from Memphis prefers the shadows cast by these institutions, focusing on artists like Jim Dickinson and Alex Chilton, and bands like Mud Boy and the Neutrons, the Mar-Keys, and Big Star. The result is an anecdotal, digressive, thoroughly informative and entertaining history of rock and roll's hometown.

1. It Came from Memphis

Buchbeschreibung Faber & Faber, 1995. Hardcover. Zustand: Good. Connecting readers with great books since 1972. Used books may not include companion materials, some shelf wear, may contain highlighting/notes, may not include cdrom or access codes. Customer service is our top priority!. Bestandsnummer des Verkäufers S_291658396

2. It Came from Memphis

Buchbeschreibung Faber & Faber, Incorporated. Hardcover. Zustand: Very Good. A copy that has been read, but remains in excellent condition. Pages are intact and are not marred by notes or highlighting, but may contain a neat previous owner name. The spine remains undamaged. At ThriftBooks, our motto is: Read More, Spend Less. Bestandsnummer des Verkäufers G0571198481I4N00

3. It Came from Memphis

4. It Came from Memphis

5. It Came from Memphis

Buchbeschreibung Faber & Faber, 1995. Zustand: Good. A+ Customer service! Satisfaction Guaranteed! Book is in Used-Good condition. Pages and cover are clean and intact. Used items may not include supplementary materials such as CDs or access codes. May show signs of minor shelf wear and contain limited notes and highlighting. Bestandsnummer des Verkäufers 0571198481-2-4

6. It Came from Memphis