Miller, Derek B. Norwegian by Night 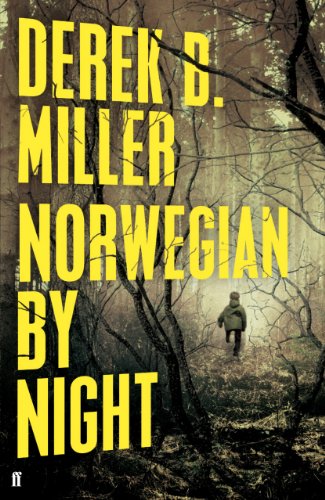 Derek B Miller's fine first novel is as strange as the two figures at its centre: a near-senile American and a silent Eastern European boy in fancy dress, fleeing across a country where both are aliens. InNorwegian by Night,everyone is in the wrong place (even the few Norwegian characters seem reluctant city dwellers) and the resulting sense of disorientation is not hard for the reader to share; for the novel is ostensibly a Scandinavian thriller yet recalls Saul Bellow and Philip Roth's more cerebral creations, and its gun-toting action hero is 82 and has dementia ... a remarkably confident debut that is at once a rich psychological study, a political -parable that seems to be about America's compulsion to intervene abroad, and a moving story of an old man's last chanceto slay his demons. -- John Dugdale The Sunday Times 20130203 Norwegian by Nightis a stunningly good debut thriller, subtle and moving with a truly original hero ... It's literate, elegant and compelling. -- Marcel Berlins The Times 20130209 In the hands of Derek B Miller, a Boston-raised academic who now lives in Oslo with his family, Horowitz is an intriguing creation. He was, it turns out, a secondary character in an as-yet-unpublished book by Miller, and something about him stayed in the author's mind. Early on, the old Marine puts you in mind of Clint Eastwood's character in Gran Torino - like him, an elderly Korean War vet and a widower - and it's not a stretch to imagine Eastwood playing Horowitz in a film version. But the book is also, in part, a moving, well-written meditation on the ageing process, on memories and regrets. We see Norway through a stranger's eyes, too (indeed, the book was first picked up by a Norwegian publisher). It's a fine read, and an interesting twist on Scandi-noir. -- Russell Leadbetter Sunday Herald 20130217 Another twist on Scandi crime ,,, you can't help rooting for the creaking ex-soldier, who tries to call on long dormant combat skills and who must painfully come to terms with the fact his attempts to do the right thing may, in fact, be manifestations of selfishness. -- Siobhan Murphy Metro

He will not admit it to Rhea and Lars - never, of course not - but Sheldon can't help but wonder what it is he's doing here...Eighty-two years old, and recently widowed, Sheldon Horowitz has grudgingly moved to Oslo, with his grand-daughter and her Norwegian husband. An ex-Marine, he talks often to the ghosts of his past - the friends he lost in the Pacific and the son who followed him into the US Army, and to his death in Vietnam. When Sheldon witnesses the murder of a woman in his apartment complex, he rescues her six-year-old son and decides to run. Pursued by both the Balkan gang responsible for the murder, and the Norwegian police, he has to rely on training from over half a century before to try and keep the boy safe. Against a strange and foreign landscape, this unlikely couple, who can't speak the same language, start to form a bond that may just save them both. An extraordinary debut, featuring a memorable hero, "Norwegian by Night" is the last adventure of a man still trying to come to terms with the tragedies of his life. Compelling and sophisticated, it is both a chase through the woods thriller and an emotionally haunting novel about ageing and regret.