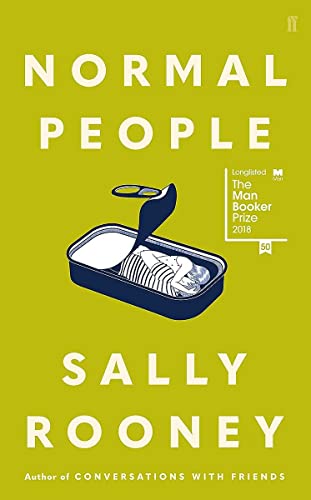 It is time to take a sharp inhale, people. Sally Rooney has produced a second novel, Normal People. It is superb . . . a tremendous read, full of insight and sweetness. (Anne Enright Guardian)

Astonishingly fresh . . . Rooney is such a gifted, brave and adventurous writer, so exceptionally good at observing the lies people tell themselves on the deepest level, in noting how much we forgive, and above all in portraying love . . . [Normal People] is a future classic. (Kate Clanchy Observer)

One the best novels I have read in years. Sally Rooney understands the complexities of love, its radical intimacy, and how power is always shifting between people, and she tells her story in a way that feels new and old at the same time. It is intelligent, spare and mesmerising, and it sent me back to an earlier point in my life in such a vivid and real way, reanimating for me with that period of time (first love), which I had thought was lost to me forever, but which felt born again in the form of this book. (Sheila Heti, author of MOTHERHOOD and HOW SHOULD A PERSON BE)

I couldn't put Normal People down - I didn't think I could love it as much as Conversations with Friends, but I did. Sally Rooney is a treasure. I can't wait to see what she does next. (Elif Batuman, author of THE POSSESSED and THE IDIOT)

It's all I want to talk about . . . How brilliant to feel so excited about a new novel . . . I'm pleased but unsurprised to report that Normal People is even better. It should obviously win [the Booker Prize]. The best novel published this year. (Times)

Rooney writes so well of the condition of being a young, gifted but self-destructive woman, both the mentality and physicality of it. She is alert to the invisible bars imprisoning the apparently free. Her hyperarticulate characters may fail to communicate their fragile selves, but Rooney does it for them in a voice distinctively her own. (Guardian)

Rooney shares with [Sylvia] Plath a knack for particularising a feminine consciousness, and this novel is the best I've read on what it means to be young and female right now. (Daily Mail)

Fascinating, ferocious and shrewd. Sally Rooney has the sharpest eye for all of the most delicate cruelties of human interaction. (Lisa McInerney)

Normal People shines . . . it is totally exhilarating in its naturalness, as easy as thinking and as real as experiencing. It's easy to tumble through its first 30 pages without feeling like you have so much as blinked, so instantly comfortable and totally intoxicating is Rooney's prose, and her rendering of an enduring love. It is an undeniably important novel about how we feel and how we relate, to each other and to ourselves. Read it and feel grateful and changed afterwards - as though you have learned something worthwhile about yourself. (VICE)

THE NUMBER ONE SUNDAY TIMES BESTSELLER WINNER OF THE COSTA NOVEL AWARD 2018 WINNER OF THE SPECSAVERS NATIONAL BOOKS AWARD 2018 (International Author) LONGLISTED FOR THE MAN BOOKER PRIZE 2018 LONGLISTED FOR THE WOMEN'S PRIZE FOR FICTION 2019 'The best novel published this year.' The Times Connell and Marianne grow up in the same small town in rural Ireland. The similarities end there; they are from very different worlds. When they both earn places at Trinity College in Dublin, a connection that has grown between them lasts long into the following years. This is an exquisite love story about how a person can change another person's life - a simple yet profound realisation that unfolds beautifully over the course of the novel. It tells us how difficult it is to talk about how we feel and it tells us - blazingly - about cycles of domination, legitimacy and privilege. Alternating menace with overwhelming tenderness, Sally Rooney's second novel breathes fiction with new life.

Buchbeschreibung Hardcover. Zustand: New. Zustand des Schutzumschlags: New. 1st Edition. FABER & FABER,2018, HARD COVER AND DUST JACKET, NEW.SIGNED TO THE TITLE PAGE BY AUTHOR.DUST JACKET ALSO HAS A CIRCULAR DECAL STATING SIGNED BY THE AUTHOR.DUBRAY.DUBRAY IS A WELL KNOW BOOKSHOP IN DUBLIN, IRELAND NEAR WHERE MS ROONEY LIVES AND ACCORDING TO THE BOOKSHOP WHEN THE BOOK WAS RELEASED IN 2018 MS ROONEY STOPPED IN ONE DAY AND SIGNED THEIR BOOKS.I HAVE AN EMAIL FROM THE BOOKSHOP CONFIRMING THIS INFORMATION. A REALLY EXCELLENT COLLECTOR'S COPY. Signed by Author(s). Bestandsnummer des Verkäufers 83