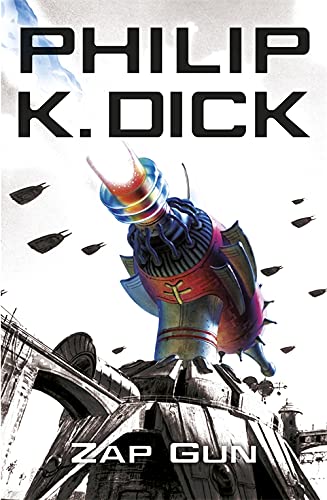 Scaldingly sarcastic yet enduringly empathetic, THE ZAP GUN is Dick's remarkable novel depicting the insanity of the arms race.

Lars Powderdry and Lilo Topchev are counterpart weapons fashion designers for a world divided into two factions - Wes-bloc and Peep-East. Since the Plowshare Protocols of 2002, their job has been to invent elaborate weapons that only seem massively lethal.

But when alien satellites hostile to both sides appear in the sky, the two are brought together in the dire hope that they can create a weapon to save the world, a task made all the more difficult by Lars falling in love with Lilo, even as he knows she's trying to kill him.

Philip K. Dick (1928-1982) was born in Chicago but lived in California for most of his life. He went to college at Berkeley for a year, ran a record store and had his own classical-music show on a local radio station. He published his first short story, 'Beyond Lies the Wub' in 1952. Among his many fine novels are THE MAN IN THE HIGH CASTLE, TIME OUT OF JOINT, DO ANDROIDS DREAM OF ELECTRIC SHEEP? and FLOW MY TEARS, THE POLICEMAN SAID.