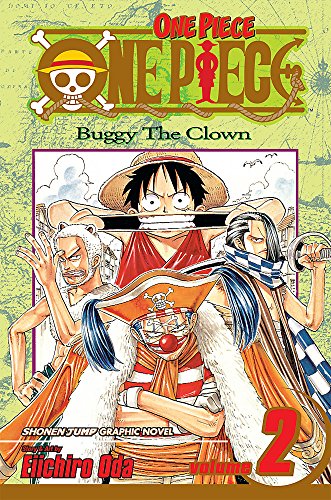 Arriving on a new island, Luffy and Zoro meet Nami, a girl thief with a special focus: robbing pirates! Specifically, she's out to steal a map of the "Grand Line," the equatorial belt where the mightiest (and richest) pirates in the world roam... It's just too bad the map belongs to the fiendish pirate Buggy the Clown! He holds the town in a reign of terror, blasting buildings (and people) apart with cannonballs, even destroying an innocent dog food store, giving Luffy his motivation: REVENGE!

As a child, Eiichiro Oda was inspired by pirates and aspired to become a manga artist. At the age of 17, he submitted his work "Wanted" and it won several awards. At the age of 19, he worked as an assistant to Nobuhiro Watsuki on the manga Rurouni Kenshin. During this time, he drew Romance Dawn, the first chapter of One Piece. In 1997, One Piece appeared for the first time in the magazine Shonen Jump and promptly became one of the most popular manga in Japan.