Tea from an Empty Cup 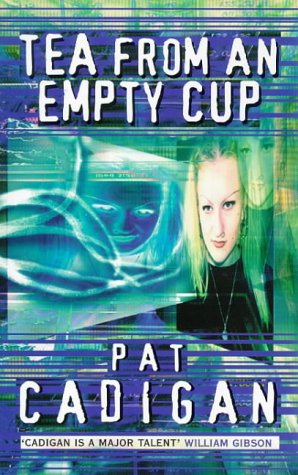 From ‘the queen of cyberpunk’ (Guardian), a vision of post-apocalyptic AR chic, mayhem and murder featuring the luckless Lieutenant Konstantin.

No matter the blood spilt in AR, surely a body is safe in the real world, you would think, while the game goes on. But Lieutenant Konstantin is looking for the RL killer/s of those sad AR junkies who end up dead in their suits.

In aesthetic pain, up against the latest thing in nervous systems, Konstantin will discover there’s no percentage in getting mad at a subroutine and no point substituting her real self for an avatar. She finally makes it into the heart of the deadly game but will she make it out again?

Junkies meanwhile are looking for another out door, the egress... to online immortality, the chance to be barbarian, vampire, wild-child, homunculus, evolved dragon – anonymity assured whatever the choice – for ever. If all they want is theme parks, no one can make them want anything more, but some players do indeed want more.

They want their world back: Japan. It crumbled beneath the sea in a series of earthquakes, leaving behind poignant memories in exile. With a unique grasp of ritual and the technology concerned, godlike full-Japanese surfers of NETsuke will stop at nothing to create New Japan.

While westerners think using garbage for culture is recycling, the Japanese are using Bunraku puppets to magical effect. Konstantin is in to something much deeper than she ever imagined. And so is the reader.

Luckless Lieutenant Konstantin is looking for the RL killers of some sad AR junkies who end up dead in their suits while on-line. She finds herself up against the latest thing in nervous systems and into something much deeper than she ever imagined – as deep as the ruins of Japan beneath the sea.

Japan was recently destroyed in a series of earthquakes. Now dispossessed Japanese surfers of the NETsuke, with a unique grasp of ritual and the technology concerned, will stop at nothing to create New Japan.

Konstantin finally makes it into the heart of the deadly game, but will she ever make it out again? Find out. Fast and funny, just reading this book generates a van der Graaf hairdo...

"Cadigan's vision of the future is both familiar and horrifying, and spellbinding as well."
NEW YORK REVIEW of 'Science Fiction'

"Cadigan has a talent for cutting right to the disturbing heart of her chosen subject, always from an unexpected angle."
TIME OUT

1. Tea from an Empty Cup

Buchbeschreibung Paperback. Zustand: Good. All orders are dispatched the following working day from our UK warehouse. Established in 2004, we have over 500,000 books in stock. No quibble refund if not completely satisfied. Bestandsnummer des Verkäufers mon0005595551

2. Tea from an Empty Cup

Buchbeschreibung Paperback. Zustand: Used; Good. **Simply Brit** Shipped with Premium postal service within 24 hours from the UK with impressive delivery time. We have dispatched from our book depository; items of good condition to over ten million satisfied customers worldwide. We are committed to providing you with reliable and efficient service at all times. Bestandsnummer des Verkäufers mon0001716939

3. Tea from an Empty Cup

Buchbeschreibung Paperback. Zustand: Very Good. A seemingly normal teenager suddenly kills her mother, and attempts to kill her father. There appears to be no motive. How curious, therefore, that her father wants her returned home and out of police custody. Stranger still, one of the officers on the case dies unexpectedly. The book has been read, but is in excellent condition. Pages are intact and not marred by notes or highlighting. The spine remains undamaged. Bestandsnummer des Verkäufers GOR003710676

4. Tea from an Empty Cup

5. Tea from an Empty Cup

6. TEA FROM AN EMPTY CUP

Buchbeschreibung Paperback. Zustand: Very Good. Item is in very good condition. If supplemental codes/CDs for textbooks are required please contact us prior to purchasing as they may be missing. Photos are stock pictures and not of the actual item. Bestandsnummer des Verkäufers DS-0586218424-2

7. Tea From An Empty Cup