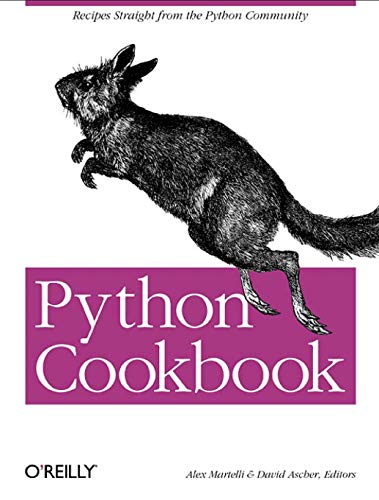 "I have no reservations recommending this book." - Tim Penhey, Cvu, February 2003

The Python Cookbook is a collection of problems, solutions, and practical examples for Python programmers, written by Python programmers. Over the past year, members of the Python community have contributed material to an online repository of Python recipes hosted by ActiveState. This book contains the best of those recipes, accompanied by overviews and background material by key Python figures.The recipes in the Python Cookbook range from simple tasks, such as working with dictionaries and list comprehensions, to entire modules that demonstrate templating systems and network monitoring. This book contains over 200 recipes on the following topics:

This book is a treasure trove of useful code for all Python programmers, from novices to advanced practitioners, with contributions from such Python luminaries as Guido Van Rossum, David Ascher, Tim Peters, Paul Prescod, Mark Hammond, and Alex Martelli, as well as over 100 other Python programmers. The recipes highlight Python best practices and can be used directly in day-to-day programming tasks, as a source of ideas, or as a way to learn more about Python.The recipes in the Python Cookbook were edited by David Ascher, who is on the board of the Python Software Foundation and is the co-author of Learning Python, and Alex Martelli, who is known for his numerous and exhaustive postings on the Python mailing list. The book contains a foreword by Guido van Rossum, the creator of Python.