Linux in a Nutshell: A Desktop Quick Reference 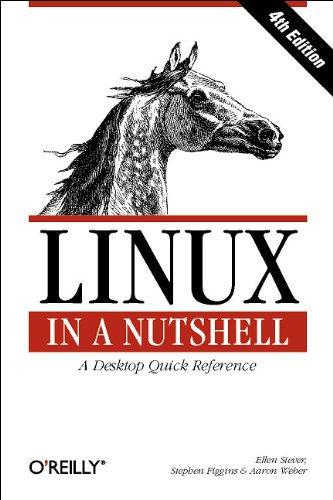 "This is one desktop companion which confident Linux users simply cannot be without." Linux User, November 2003 "The best way to sum this book up is with the original reviewer's words: "If you don't lock your office, this will be the first thing that a techie colleague will steal!"." Linux Format, September "...anyone serious about Linux programming and administration needs this book...The authors are to be congratulated for the scope of coverage, as here's enough here about both the vi and Emacs editing systems, desktop set-ups and packages, as well as a nod to multimedia use. " - Gary Flood, IT Training, October 2004

Linux in a Nutshell, now in its fourth edition, has won awards in the Linux community as the most indispensable book about Linux. It is an essential desktop reference for the commands that users of Linux utilize every day, with the depth of information and the practical, succinct "In a Nutshell" format that made the previous editions so popular.Comprehensive but concise, Linux in a Nutshell covers all substantial user, programming, administration, and networking commands for the most common Linux distributions. It's several quick references rolled into one: sed, gawk, RCS, CVS, vi, Emacs, bash, tcsh, regular expressions, package management, bootloaders, and desktop environments are all covered in this clear, to-the-point volume, along with core command-line utilities.The fourth edition continues to track the major changes in bootloaders, the GNOME and KDE desktops, and general Unix commands. Several commands related to CDs and music reflect the evolution of multimedia on Linux. Coverage has been added for GRUB, which has become the default bootloader on several Linux distributions, and for vim, the popular and feature-loaded extension to vi. The addition of several new options to the iptables firewall command and new commands related to DNSSEC and ssh show the book's value as a security tool. With this book, you no longer have to grope through long manpages and info documents for the information you need; you'll find it here in clear language and an easy-to-read format.Contents include:

1. Linux in a Nutshell

2. Linux in a Nutshell

3. Linux in a Nutshell

4. Linux in a Nutshell