Verwandte Artikel zu The Death of Money: The Coming Collapse of the International...

Rickards, James The Death of Money: The Coming Collapse of the International Monetary System

The Death of Money: The Coming Collapse of the International Monetary System 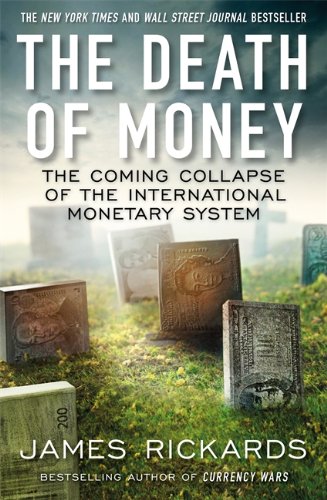 A terrifically interesting and useful book...fascinating (Kenneth W. Dam, former deputy secretary of the Treasury and adviser to three presidents)

The Death of Money contains very big, provocative ideas clearly explained and delivered...Rickards's insight enables him to connect the dots in a way that few others can (John Hathaway, portfolio manager, Tocqueville Gold Fund)

The Death of Money is an important new book for those who worry about the future of our country (R. Christopher Whalen, noted bank analyst; author of Inflated)

A great book makes you think differently about the world - and this one does just that (Don Young, twenty-five-time Institutional Investor All-Star Analyst)

The international monetary system has collapsed three times in the past hundred years. Each collapse was followed by a period of war, civil unrest, or damage to the stability of the global economy. Now James Rickards explains why another collapse is rapidly approaching.

The US dollar has been the global reserve currency since the end of the Second World War. If the dollar fails the entire international monetary system will fail with it. But Washington is gridlocked, and America's biggest competitors - China, Russia, and the Middle East - are doing everything possible to end US monetary hegemony.

James Rickards offers a bracing analysis of the fundamental problem: money and wealth have become ever more detached. Money is transitory and ephemeral; wealth is permanent and tangible. While wealth has real value worldwide, money may soon be worthless. The world's big players - governments, banks, institutions - will muddle through by making up new rules, and the real victims of the next crisis will be small investors.

Fortunately, it is not too late to prepare for the coming death of money. In this riveting book, James Rickards shows us how.

'A terrifically interesting and useful book...fascinating' Kenneth W. Dam, former deputy secretary of the Treasury and adviser to three presidents

James Rickards is the author of Currency Wars, which has been translated into eight languages and won rave reviews from the Financial Times, Bloomberg, and Politico. He is a portfolio manager at West Shore Group and an adviser on international economics and financial threats to the Department of Defense and the U.S. intelligence community. He served as facilitator of the first-ever financial war games conducted by the Pentagon. He lives in Connecticut.

1. Death of Money The Coming Collapse of the International Monetary System

2. Death of Money The Coming Collapse of the International Monetary System