Sams Teach Yourself AppleScript in 24 Hours 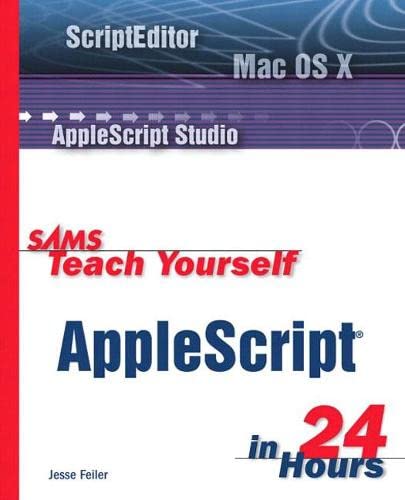 AppleScript, built into the Macintosh OS, is used by hndreds of companies and countless individuals to automate tasks, control applications, automate Web sites, and more. It's a scripting language that uses natural, English-like syntax -- much easier to code than most scripting languages. Sams Teach Yourself AppleScript in 24 Hours offers a clearly written, well organized introduction to AppleScript. The book starts with running existing scripts, then teaches the reader to write simple scripts to create shortcuts and increase productivity on the Mac OS, then moves on to working with popular Macintosh applications with scripts.

Jesse Feiler is the author of a number of Mac OS X books including Mac OS X Jaguar: The Complete Reference; Mac OS X Developer's Guide; and Making Movies, Photos, Music, and DVDs on Your Mac. He is also the author of Building WebObjects 5 Applications, as well as many books on the Web-based enterprise (such as Database-Driven Web Sites and Managing the Web-Based Enterprise), the Y2K problem, home offices, databases, and FileMaker. He has written numerous white papers for Cutter Consortium. His books on OpenDoc, Cyberdog, Apple Guide, and Rhapsody are now collector's items. He has worked as a developer and manager for companies such as the Federal Reserve Bank of New York (monetary policy and bank supervision), Prodigy (early Web browser), Apple (information systems), New York State Department of Health (rabies and lead poisoning), The Johnson Company (office management), and Young & Rubicam (media planning and new product development). His interests in new forms of technical training have led him to MediaSchool (http://www.mediaschool.com), for which he has authored several Mac OS X courses available over the Internet, as well as to Geek Cruises' Mac Mania cruise to Alaska. He is also the first author of a technical book to be published in both a paper version and as an e-book. His Web site, http://www.philmontmill.com, provides additional information as do his blog pages at http://www.pickwickpixels.com. Active in the community, he is past president of the Mid-Hudson Library System, chair of the Philmont Comprehensive Plan Board, founder of the Philmont Main Street Committee, and treasurer of the HB Playwrights Foundation. He is a regular on WAMC's Roundtable program. He lives 100 miles north of New York City in the village of Philmont with a rescued greyhound and a cat. His research into Apple's iLife application has earned him the sobriquet "The Digital Scourge of Philmont."

1. Sams Teach Yourself AppleScript in 24 Hours

2. Sams Teach Yourself AppleScript in 24 Hours

3. Sams Teach Yourself AppleScript in 24 Hours

Buchbeschreibung Sams, 2003. Zustand: Fair. This book has soft covers. Ex-library, With usual stamps and markings, In fair condition, suitable as a study copy. Please note the Image in this listing is a stock photo and may not match the covers of the actual item,850grams, ISBN:9780672325182. Bestandsnummer des Verkäufers 3904089

4. Sams Teach Yourself AppleScript in 24 Hours

Buchbeschreibung Paperback. Zustand: Very Good. The book has been read, but is in excellent condition. Pages are intact and not marred by notes or highlighting. The spine remains undamaged. Bestandsnummer des Verkäufers GOR007022698

5. Sams Teach Yourself AppleScript in 24 Hours