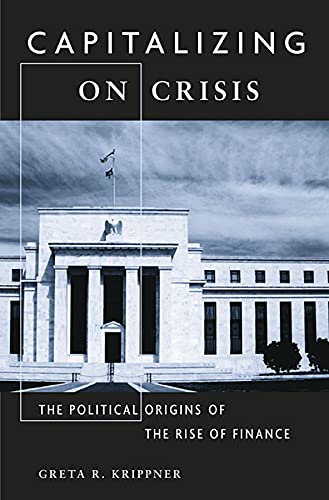 The Political Origins of the Rise of Finance

Amidst the tsunami of books coming out in the wake of the recent financial crisis, Krippner's work stands out for its unusual approach. Rather than addressing the venality and incompetence of those with responsibility for regulating the economy, Krippner tells the history of the growth of financialization from the perspective of the regulators...In her account, the regulators were searching for ad hoc responses to what were deeper, perhaps even intractable problems. The high point of the book is her magnificent analysis of the erosion of Regulation Q, in which regulators cracked open the door to financial deregulation, unleashing the massive deregulation that came later. -- M. Perelman Choice 20110901

In the context of the recent financial crisis, the extent to which the U.S. economy has become dependent on financial activities has been made abundantly clear. In Capitalizing on Crisis, Greta Krippner traces the longer-term historical evolution that made the rise of finance possible, arguing that this development rested on a broader transformation of the U.S. economy than is suggested by the current preoccupation with financial speculation. Krippner argues that state policies that created conditions conducive to financialization allowed the state to avoid a series of economic, social, and political dilemmas that confronted policymakers as postwar prosperity stalled beginning in the late 1960s and 1970s. In this regard, the financialization of the economy was not a deliberate outcome sought by policymakers, but rather an inadvertent result of the state's attempts to solve other problems. The book focuses on deregulation of financial markets during the 1970s and 1980s, encouragement of foreign capital into the U.S. economy in the context of large fiscal imbalances in the early 1980s, and changes in monetary policy following the shift to high interest rates in 1979. Exhaustively researched, the book brings extensive new empirical evidence to bear on debates regarding recent developments in financial markets and the broader turn to the market that has characterized U.S. society over the last several decades.

1. Capitalizing on Crisis : The Political Origins of the Rise of Finance

2. Capitalizing on Crisis - The Political Origins of the Rise of Finance

Buchbeschreibung 2012. Zustand: NEW. 9780674066199 This listing is a new book, a title currently in-print which we order directly and immediately from the publisher. For all enquiries, please contact Herb Tandree Philosophy Books directly - customer service is our primary goal. Bestandsnummer des Verkäufers HTANDREE0809955

6. Capitalizing on Crisis : The Political Origins of the Rise of Finance

10. Capitalizing on Crisis The Political Origins of the Rise of Finance