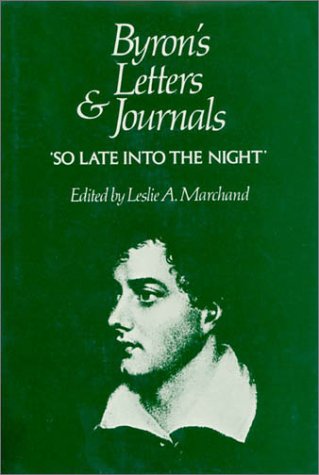 Marchand's new edition of Byron's letters and diaries is a delight to read.--New York Review of Books

George Gordon Byron was a superb letter-writer: almost all his letters, whatever the subject or whoever the recipient, are enlivened by his wit, his irony, his honesty, and the sharpness of his observation of people. They provide a vivid self-portrait of the man who, of all his contemporaries, seems to express attitudes and feelings most in tune with the twentieth century. In addition, they offer a mirror of his own time. This first collected edition of all Byron’s known letters supersedes Prothero’s incomplete edition at the turn of the century. It includes a considerable number of hitherto unpublished letters and the complete text of many that were bowdlerized by former editors for a variety of reasons. Prothero’s edition included 1,198 letters. This edition has more than 3,000, over 80 percent of them transcribed entirely from the original manuscripts.

In the fifth installment of this marvelous serial story, we read about Byron’s separation from his wife. Besides his pleading letters to Annabella asking her to reconsider, there are level-headed letters to Murray and Hobhouse and Hunt and Rogers—all written during the tempestuous time before his final departure from England. The accounts written during the ensuing summer, of Waterloo and the Rhine and Switzerland, reveal new depths of Byron’s maturing mind. But the very best letters here are the ones from Italy: freed from the inhibitions of English society, Byron’s spirit seems to expand and his letters reflect the joie de vivre that, despite his melancholy, was an inherent part of his character.