Nonzero: The Logic of Human Destiny 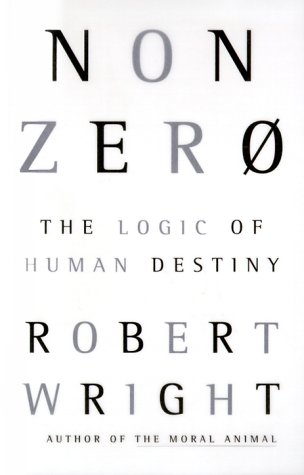 Challenging the idea that biological evolution is aimless, the author explores his theory that greater social complexity is "in the cards" for humanity as the species continues to evolve.

ning of Nonzero, Robert Wright sets out to "define the arrow of the history of life, from the primordial soup to the World Wide Web." Twenty-two chapters later, after a sweeping and vivid narrative of the human past, he has succeeded — and has mounted a powerful challenge to the conventional view that evolution and human history are aimless.

Ingeniously employing game theory — the logic of "zero-sum" and "non-zero-sum" games — Wright isolates the impetus behind life's basic direction: the impetus that, via biological evolution, created complex, intelligent animals and then, via cultural evolution, pushed the human species toward deeper and vaster social complexity. In this view, the coming of today's interdependent global society was "in the cards" — not quite inevitable, perhaps, but, as Wright puts it, "so probable as to inspire wonder." So probable, indeed, as to invite speculation about higher purpo

1. Nonzero: The Logic of Human Destiny