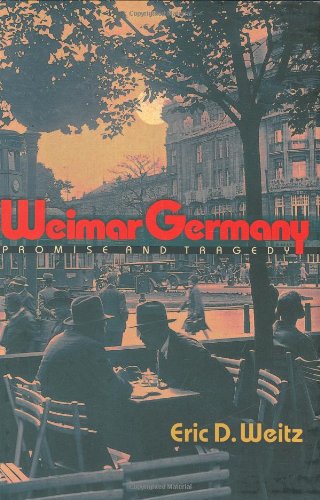 A New York Times Book Review Editor's Choice
A History Book Club selection
One of Financial Times's Best Books for 2007
"In his engaging readings of these works, Weitz forgoes abstruse analysis. Instead, he presents them as fresh attempts to make sense of a world in which reliable beliefs about authority and order, class and gender, wealth and poverty, no longer held. His most innovative chapter is an imaginary walk through Berlin, observing the daily lives of the city's different classes. . . . Better than most histories, the book connects culture, politics and city life."--Brian Ladd, New York Times Book Review

"Weimar Germany is elegantly written, generously illustrated and never less than informative. It is also history with attitude. In that respect, it perhaps also reflects in itself something of the fractious period which its pages so convincingly evoke."--Peter Graves, Times Literary Supplement

"Excellent and splendidly illustrated. . . . Weimar was more than a German phenomenon. . . . [Weimar Germany] is a superb introduction to its world, probably the best available."--Eric Hobsbawm, London Review of Books

"Weitz takes readers on a walk through Weimar Republic­era Berlin in the footsteps of a 1920s flâneur, an urban ambler. . . . Separate chapters, with a wealth of well-chosen illustrations, explore Weimar's new theories of architecture, graphic arts, photography, theater, philosophy and sexuality. Weitz selects key exemplars of each discipline--Brecht, Weill, Mann, Bruno Taut, Erich Mendelsohn, August Sander, László Moholy-Nagy, Hannah Höch, Siegfried Kracauer, etc.--for in-depth focus. . . . A lively style and excellent illustrations make this intellectually challenging volume accessible to both academics and armchair scholars."--Publishers Weekly (starred review)
"Weitz has produced an elegant and captivating study of Germany's Weimar years, that turbulent period from 1918 to 1933 when the old German society seemed to break apart. In this period, Germany became a constitutional democracy, the arts blossomed, modern and liberal ideas flourished, and the economic and political situation staggered from one crisis to another, ending in the Nazi ascendance to power. This period is often treated as simply the forerunner to the Nazi era, but Weitz shows that it was far more than that. . . . Weitz has synthesized in clear and engaging fashion a great deal of the huge primary and secondary literature of Weimar. . . . If you have only one book on the Weimar period, this should be it. For all libraries."--Barbara Walden, Library Journal (starred review)
"[Weitz] is a reliable guide through Weimar's political and economic maze, and a good one on the social revolution that made many women--far from all--less dependent on husband, hearth and home. In one of his best chapters, Mr. Weitz takes us on a ramble through the sleepless metropolis of 1920s Berlin: from the glittering cafes around Potsdamer Platz to Isherwood's cabarets and seedy bars, from the bracing beaches of Wannsee Lake to the dank and stifling dwellings of the workers' quarter, Wedding."--The Economist

"Weitz offers a comprehensive history of the Weimar Republic that combines a sober approach to the politics and economics of this conflicted era with a highly engaging and readable new take on its famous cultural and social experiment...One of the book's achievements compared to previous Weimar histories is Weitz's integration of important work on gender, sex, and the body throughout his nine chapters."--H.D. Baer, Choice

"It is impossible to talk about post-1918 Germany without focusing on its political and financial instability. . . . Weitz covers this ground clearly and in sharp detail, breaking down the complex tug-of-war between communists, democrats and conservatives. . . . But more gripping to Weitz (and to this reviewer) is the artistic and intellectual ferment that Weimar embodied--a cultural explosion he chronicles with a passionate, persuasive voice. . . . [Weitz] wins points for his no-frills language that transports us back to the racy, cosmopolitan atmosphere of 1920s Berlin--and for saving his best for last. In the book's resonant closure about the rise of authoritarianism, Weitz seems in directly to hold a mirror up to America's own political catastrophe in the post-9/11 Bush years."--Michael Levitin, The Financial Times

Weimar Germany still fascinates us, and now this complex and remarkably creative period and place has the history it deserves. Eric Weitz's Weimar Germany reveals the Weimar era as a time of strikingly progressive achievements--and even greater promise. With a rich thematic narrative and detailed portraits of some of Weimar's greatest figures, this comprehensive history recaptures the excitement and drama as it unfolded, viewing Weimar in its own right--and not as a mere prelude to the Nazi era.

Weimar Germany tells how Germans rose from the defeat of World War I and the turbulence of revolution to forge democratic institutions and make Berlin a world capital of avant-garde art. Setting the stage for this story, Weitz takes the reader on a walking tour of Berlin to see and feel what life was like there in the 1920s, when modernity and the modern city--with its bright lights, cinemas, "new women," cabarets, and sleek department stores--were new. We learn how Germans enjoyed better working conditions and new social benefits and listened to the utopian prophets of everything from radical socialism to communal housing to nudism. Weimar Germany also explores the period's revolutionary cultural creativity, from the new architecture of Erich Mendelsohn, Bruno Taut, and Walter Gropius to Hannah Höch's photomontages and Bertolt Brecht and Kurt Weill's theater. Other chapters assess the period's turbulent politics and economy, and the recipes for fulfilling sex lives propounded by new "sexologists." Yet Weimar Germany also shows how entrenched elites continually challenged Weimar's achievements and ultimately joined with a new radical Right led by the Nazis to form a coalition that destroyed the republic.

Thoroughly up-to-date, skillfully written, and strikingly illustrated, Weimar Germany brings to life as never before an era of creativity unmatched in the twentieth century-one whose influence and inspiration we still feel today.